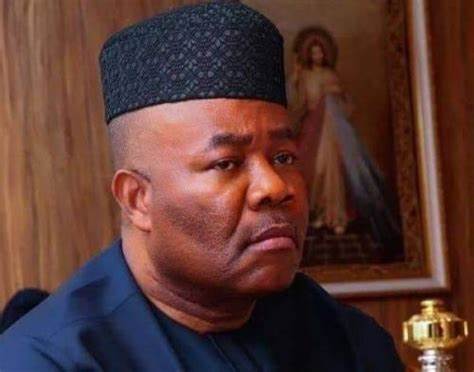 By Michael Oche and Emmanuel Obisue

Minister of State Education, Chukwuemeka Nwajiuba and the Minister of Niger Delta Affairs, Sen. Godswill Akpabio have both resigned their appointments as members of the Federal cabinet to pursue their presidential ambitions in 2023.

Buhari had on Wednesday during the Federal Executive Council, FEC meeting ordered all cabinet members eyeing elective offices to quit before May 16.

Findings by the Nigerian Pilot indicated that Nwajiuba had tendered his resignation on April 28th.

Confirming the development Mr. Paul Odili, Special Assistant to the former Minister of Education Nwajiuba, said “that the Honourable Minister, on accepting the nomination form on the 27th of April bought for him by his supporters led by an umbrella group, Project Nigeria wrote the President on the 28th informing him that having accepted the nomination by his supporters to contest the office of the presidency on the party’s platform that he would like to disengage from office to enable him concentrate on his campaign and to avoid any conflict of interest. I can tell you Mr. President immediately accepted his letter of resignation.”

Meanwhile, in a statement made available to journalists on Wednesday night, Chief Press Secretary to Akpabio on Media, Jackson Udom, confirmed that: “the Minister has resigned. He has submitted his resignation letter to the SGF. We are waiting for him at the ICC, where he is coming to submit his nomination form”.

The statement strongly debunked rumours that Akpabio has withdrawn from the 2023 presidential race, adding that “he will soon submit his nomination form at the International Conference Centre, Abuja, in line with his party’s guidelines”.

“Our attention has been drawn to mischievously written news stories making the rounds by paid agents of some politicians that the leading presidential aspirant, Senator Godswill Akpabio, has purportedly withdrawn from the presidential race. This is a joke carried too far.

“This is certainly the handiwork of those who are scared of contesting against Senator Godswill Akpabio.

“Senator Akpabio has resigned his appointment as Minister, Niger Delta Affairs Ministry and will soon submit his nomination form at the International Conference Centre, Abuja, in line with his party’s guidelines.

“For those behind this lies and falsehood, we advise that they should learn to live with the reality, that Senator Akpabio is fully in the race, not only for the All Progressives Congress (APC) ticket, but to emerge the next democratically elected President of the Federal Republic of Nigeria,” the statement added.

Also, Minister of Labour and Employment, Senator Chris Ngige, has said that he is not in a hurry to resign from his appointment as he has to consult with President Muhamadu Buhari and his constituents before tendering his resignation letter.

He said “I have no reaction for now because the President said if anyone wants clarifications, the person should meet him.