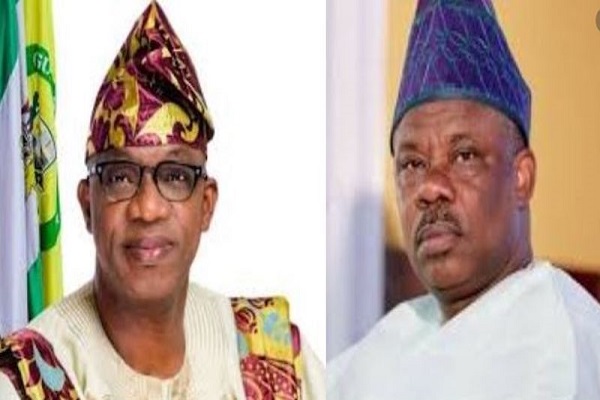 Dapo Abiodun Campaign Organisation (DACO) has berated the immediate past governor of Ogun State, Sen. Ibikunle Amosun, for denying involvement in the campaign against his successor, Dapo Abiodun.

DACO alleged that the former governor has endorsed a governorship aspirant of the All Progressives Congress (APC), Hon. Abiodun Akinlade, as his preferred candidate.

The campaign organisation noted that the statement of denial issued by the media office of Sen. Amosun was an attempt to mislead the general public.

DACO made this known via a statement issued and made available to The Star on Wednesday.

It added that Sen. Amosun “should be able to stand by his actions” and not deny involvement in the campaign against Governor Abiodun

The statement read: “The attention of the Dapo Abiodun Campaign Organisation (DACO) has been drawn to a terse and watery press statement issued by the ‘SIA Media Office’, making a feeble denial that “Sen Amosun is not involved directly or indirectly, in any campaign against Governor Abiodun or any person for that matter.”

“There is no doubt that the said statement of denial was an unsuccessful attempt to mislead and divert the attention of the discerning public away from the political machinations and shenanigans of the “SIA Media Office”. Senator Ibikunle Amosun, by the denial, is simply hiding behind a finger.

“In a publication by The Encounter on April 19, 2022, and other platforms, the loser in the 2019 gubernatorial polls in Ogun State, Hon. Abiodun Akinlade, not only owned up to the fictitious, baseless, misleading, and hate-filled petition written against Governor Dapo Abiodun to the headquarters of the All Progressives Congress (APC), by one unknown petitioner claiming to be a “leader” in our party, Hon. Akinlade actually named Senator Amosun as the sponsor/director of the petition.

“Akinlade stated and we quote: “I need to come and tell my people that if what we are looking at (petition) goes through and there is opportunity, I will come out to mobilise my people and I will run. But if the petition is jettisoned by the party and the party decides otherwise, we will stand with the party. That is the directive of our leader, Senator Ibikunle Amosun.”

“Since then, the statements and outputs from the ‘SIA Media Office’ are nothing but storylines packed with political chicanery.

“Not unexpectedly, and true to well-known character, as we saw in the buildup to the 2019 general election, Senator Amosun and his people became more desperate when notable members in their now fractured camp started deserting in droves; saying they were tired of persistent deceit and failed promises. This set of serial petitioners became very desperate and peeved after Senator Lekan Mustapha, Amosun’s former Commissioner for Health, Dr. Babatunde Ipaye, and several others from Amosun’s camp visited Governor Abiodun few weeks ago in Abeokuta to pledge their loyalty to Mr. Governor and his second term aspiration.

“A man should be able to stand by his actions. In the words of Maya Angelou: “Courage is the most important of all the virtues, because without courage, you can’t practice any other virtue consistently.”

“The “SIA Media Office” should tell the story of its cowardly denial to the marines,” DACO stated.