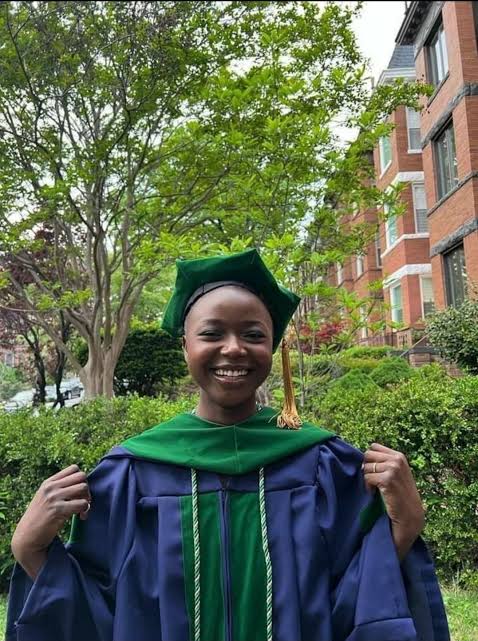 Boubini Miyensinte Jones-Wonni was born in Ido-ani, a town in Ondo state, on the 23rd of October 1999 to the family of Dr and Mrs Jones-Wonni. She hails from Arogbo Ese- Odo local government area of Ondo State.

She started her primary education in Banky’s Private school Apo Abuja. Due to a sterling performance in primary school, she was encouraged to sit for the common entrance examinations from Primary three (3) which she passed in flying colours and proceeded to Word of Faith Group of Schools in Area 1 Abuja.

While in High school, she continued on the path of hard-work and diligence. As such, she was made the library Prefect, was awarded a full tuition fee waiver in her final year by the management of the school and subsequently graduated as best graduating student and valedictorian for the graduating class of 2014 at the age of Fourteen (14) in the year 2014.

Upon performing excellently in a test conducted, she became a beneficiary of the Special Education Scholarship programme for Niger Delta Students. An initiative of the Presidential Amnesty Programme under the leadership of Hon Kingsley K. Kuku and was sent to the USA to study Medicine and Surgery. This required her to first complete a first degree in a relevant discipline prior to medical school.

Thus she was admitted in Miles College Alabama, U.S.A to obtain a degree in biological sciences. She was able to achieve this in a record three (3) years as opposed to the conventional four (4) years of study.

While in Miles she was the secretary of finance of the Student Government Association (SGA), an equivalent of the Student Union Government in tertiary institutions here in Nigeria. She was also a member of Honours groups for distinction students, such as the Beta Kappa Chi Scientific honours society.

At the completion of her studies in 2018, she was adjudged the best graduating student in the Department of Natural science and Mathematics with a grade point average of 4.0/4.0 and a Co-Valedictorian of the graduating students at the age of Eighteen (18).

Boubini wrote the Medical College Admissions Test ( MCAT), a pre-requisite test for admission into medical school and scored in the 91st percentile, this means that her score was in the top 9% of all the students who took the examination in the United states of America at the time, and consequently received an invitation to the Howard University Medical School in Washington DC to study Medicine in 2018.

She continued in her winning ways upon commencing medical school and was honoured to have been awarded numerous scholarships through the school for financial need and academic achievement, namely the Rana Family scholarship, the E & M. Prioleau Endowed scholarship. She also received the Student of the Year award for her work with the Anaesthesia and Critical Care Interest Group. She was placed in the top 10% of her class at the end of the first year.

These accolades further spurred her in the second year of medical school during which she received the Dr. Josephus C. and Nellie C. Carr Foundation award for academic achievement. By the end of the 2nd year, she was named the second in her class.

By year 3 she was inducted into the Gamma chapter of the Alpha Omega Alpha Honour Medical Society, an honour that was provided to only three (3) other students at the time. She also received the Auxiliary to the Medico-Chirurgical Society of the District of Columbia Scholarship to worthy medical students and the Dr. Louise Maxienne Dargans Fleming Award to a student with academic promise.

By year 4, she was number one in the class, was nominated by her classmates as a member of the Gold Humanism Honour Society as someone who serves as an exemplars in compassionate patient care.

She eventually graduated on the 6th of May 2022 as the best graduating student in the Howard University Medical School class of 2022, at the age of twenty 22, and the youngest in the class. She is also one among the only two members of the class admitted to the prestigious Harvard University Medical School, for residency (Post-graduate) training in Internal Medicine.