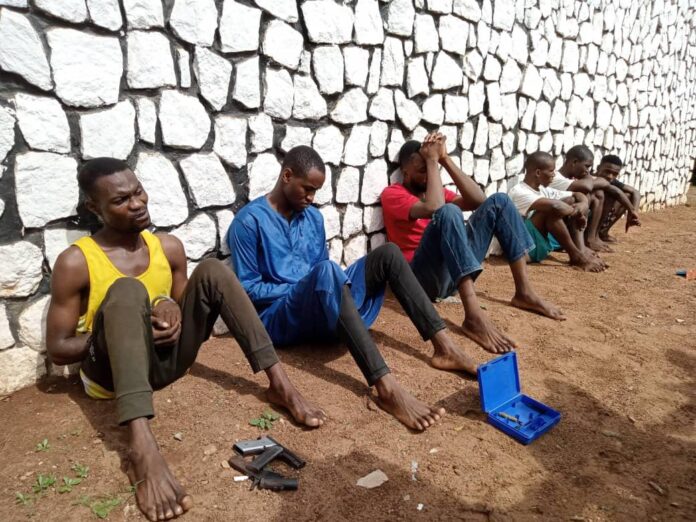 Speaking with Journalists, the state commissioner of Police, Tuesday Assayomo, said among the suspects was one Mumini Baba, who had confessed to be a hired-killer.

He said, “at about 1130hrs, while on routine stop and search patrol along the Gambari area of Ilorin, a team of policemen attached to C Division, Oja Oba Ilorin, sighted an approaching motorcycle, in an attempt to evade search, the rider jumped off the motorcycle and took to his heels, he was given a hot chase, eventually arrested and searched, two fire-arms were recovered from him. On interrogation, he stated that he was invited by one Abdulahi ‘m’ of Okolowo area of Ilorin presently at large to Ilorin for a killing assignment. Efforts by Anti- Kidnapping unit to arrest other members of the gang are in progress.

“Consequent upon recent reports of activities of some criminal elements in Kwara state, the state Police command re-strategized, devised and deployed new operational methods in the state which culminated in the arrest of members of different cult groups in Ilorin amongst whom are 15 suspects that have been charged to court for various criminal offences and are presently remanded in Correctional centres.

“Seven different categories of firearms were recovered within the period under review. Five confirmed shop-breakers and criminal receivers were arrested and charged to court with stolen items ranging from deep freezers, Elepaq generators, motorcycles, television sets, home appliances including rolls of Ankara and several pairs of shoes recovered from them.

“Suspected ritualists with human parts were equally arrested and charged to court”, he said.

The Police boss said that suspects in all the cases would be charged to court as soon as the investigation into the cases is satisfactorily concluded.