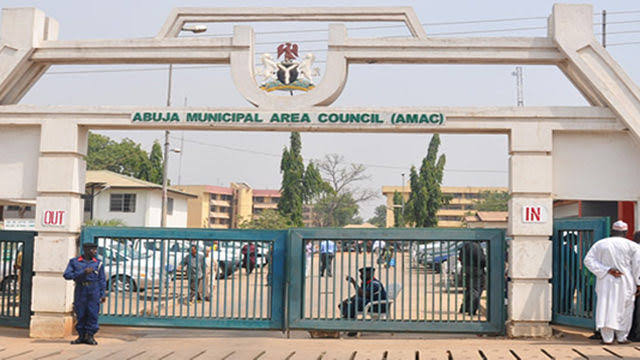 Some residents of Abuja Municipal Area Council AMAC, have staged a protest against what they described as selfish moves by the outgoing area council administrations to deny them of their mandate, through a judgment from the court to extend the tenure of the outgoing chairmen and councillors by one year.

The protesters who carried placards with inscriptions such as: ‘No tenure elongation,’ ‘stop manipulating the minister’, ‘give us true justice,’ amongst other inscriptions in front of the FCT Magistrate Court, expressed disappointment that any court of competent jurisdiction would grant tenure elongation to the present council chairmen who were inaugurated with the 2010 Electoral Acts.

A legal practitioner Mr. Simon Chukwuemeka, who was amongst the protesters explained that since the outgoing chairmen were elected and inaugurated by the 2010 Electoral Acts which specified a three years tenure, it would be wrong to grant them judgment for tenure elongation.

“We are aware of a judgment by a High Court of Federal Capital Territory FCT, under Justice Ibrahim Muhammed in Kubwa district where the council chairmen have gotten judgment in their favour to extend their tenure by one year. That was a wrong judgment and should not be allowed to stand.

“Imagine they are taking the tenure elongation case to court and they only joined the FCT minister as the defendant, why did they not include the Independent National Electoral Commission INEC, and the elected council chairmen and their councillors? That shows that it is a conspiracy against the peoples’ interest and should not be allowed to stand,” he said.

Mrs. Grace Danusa, who was also amongst the protesters said that they decided to come out to join the protesters because they were tired of the injustice suffered by the common people in the country and they need to support the call against tenure elongation for peace to reign in the territory.

“If they wanted tenure elongation, they should have taken the matter to court before the election was conducted and produced winners, not after the elections. That is wickedness and a deliberate act to cause a crisis in the territory. So, that so-called judgment should not be allowed to stand, for peace to reign,” she said.

She further said that if the people are denied their mandate by not allowing the swearing-in of elected council chairmen and councilors on Friday, May 20, there might be a serious crisis in the territory, so there is a need to avoid such.