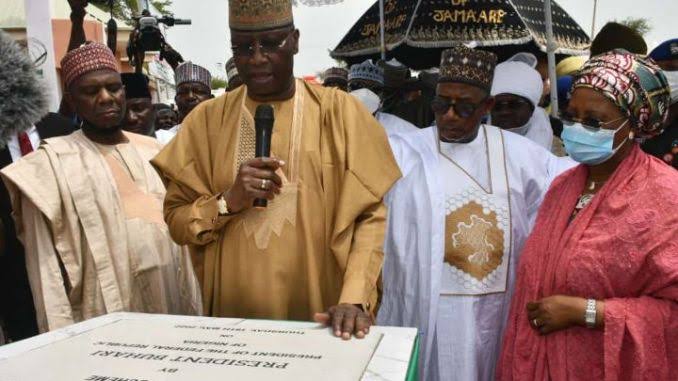 President Muhammadu Buhari has assured of his administration’s determination to ensure sustainability in provision of federal government intervention projects aimed at bringing development in both urban and rural areas across the federation.

He made the remark in Bauchi on Thursday while commissioning the multi billion naira Bauchi Urban water project during a one day official working visit to the state metropolis.

President Buhari represented by the Secretary to the Government of the Federation, Mr Boss Mustapha commended the Bauchi State Government for the giant effort towards improving water supply in the state.

Some of the major components of the multi billion naira project include construction and expansion of Gubi Dam treatment plant, construction of high capacity concrete reservoirs in Warinje and Buzaye hills as well as replacement of and expansion of pipelines across Bauchi metropolis among others.

President Muhammadu Buhari maintained that the development would improve the wellbeing and socioeconomic development of the citizens.

The President said provision of infrastructure in critical areas is part of his administration’s commitment to improve access to potable water for the teaming populace.

He urged the benefiting communities to reciprocate the gesture through supporting government Laudable initiatives.

Speaking earlier, the State Governor, Bala Mohammed said the project was necessitated by the growing population of the state which has over stretched the public facilities, saying his administration has also commenced resuscitation of water schemes in all the 20 local government areas of the state.

He commended the world bank and the federal government for the intervention and assured of proper maintenance of the facilities.

The President’s delegation was accompanied by ministers of state of industries, trade and investment; agriculture, Works and Housing.