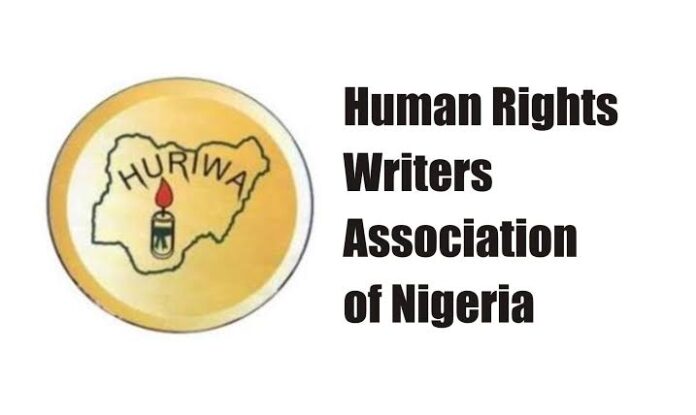 Civil rights advocacy group, Human Rights Writers Association of Nigeria, (HURIWA) on Saturday, said security agencies including the Nigeria Police Force and the Nigerian Army must stop framing up Nollywood actors and innocent civilians as members of the Indigenous Peoples of Biafra.

HURIWA is worried too that the African Traditional Religion is being criminalised and demonised by security forces in the South East of Nigeria who regularly invade sacred shrines, desecrate them under the guise of pursuing suspected members of the now proscribed INDIGENOUS PEOPLE OF BIAFRA (IPOB).

HURIWA, in a statement by its National Coordinator, Comrade Emmanuel Onwubiko, said the trend of trying to score erroneous points by detaining and branding innocent Igbo youths and prominent sons and daughters as criminals is disconcerting just as the Rights group bemoans the declining professional practices amongst members of the security forces.

The group said security agencies must forthwith release all Igbo youths falsely detained and languishing in cells and prisons all over the country.

HURIWA recalled that the Imo State Police Command arrested a Nollywood actor known as Hycent Azunna and branded him a member of IPOB’s Eastern Security Network, a claim which his friends nullified as untrue.

Also, last October, the Department of State Services and the police colluded and arrested veteran Nollywood actor, Chiwetalu Agu, for alleged promotion of Biafra and for wearing a Biafra outfit while distributing bread and other items to the poor. He was humiliated and spent days in detention but later released when public outrage greeted his arrest. No charge was brought against him as the allegations of the security agents against him proved false.

Similarly, 21-year-old lady, Glory Okolie, was arrested last year by officers of the Intelligence Response Team in Owerri, Imo State. Okolie was arrested on June 17, 2021, the same day she was to sit for the Unified Tertiary Matriculation Exam.

The police as usual erroneously branded Okolie as a girlfriend of an IPOB member, subjected her to inhumane treatment like washing of their clothes, cooking and all sorts of nonsense.

The police held on to her for months till they were forced to release her this year due to the outrage and agitation of activists, civil society organisations and human rights lawyers.

HURIWA’s Onwubiko on Saturday said, “The arbitrary arrests of youths in Owerri and labelling them as IPOB members is highly disturbing.  Now, if tenants are owing landlords, the police is bribed to frame up the tenant as IPOB and paraded and some ends up disappearing for life.

“The cases are numerous from Chiwetalu Agu to Hycent Azunna to Glory Okolie. Many like them have been persecuted and some even killed. A former Archbishop of Catholic Archdiocese of Owerri, Anthony Obinna, once raised the alarm of abandoned corpses of young Igbo boys slaughtered and abandoned at Federal Medical Centres by the police.

“The infractions by police and the Army in Imo and use of extrajudicial killings must stop. Security agencies must not use Igbo youths to score points or prove to their bosses that they are working. While we encourage clamp down on criminals and ‘unknown gunmen’ turning the South-East upside down and appeal for greater use of hard core intelligence driven skills to flush out mass killers and hoodlums, HURIWA note with seriousness that the framing up of Igbo youths as criminals which is utterly nonsensical and smacks of apartheid practices and ethnic profiling must stop.”