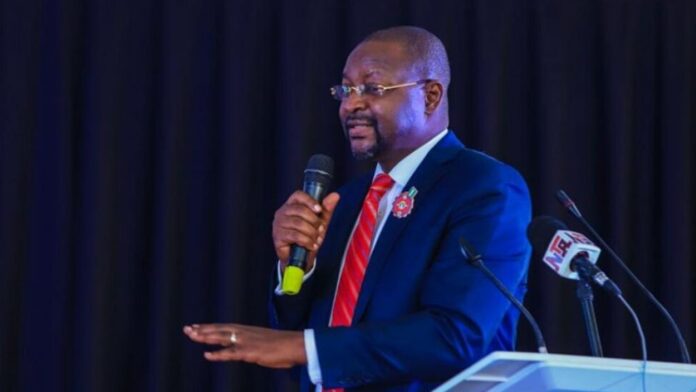 Minister of Sports, Sunday Dare has urged the Nigeria Football Federation, NFF, to work toward the improvement of domestic leagues in the country.

Dare made the call when he hosted the U-20 men’s national team, the Flying Eagles in Abuja, following their victory at the WAFU B zone championship in Niamey, Niger Republic.

The minister said the performance showed the commitment of the board of the NFF toward improving the game of football in the country.

“I want you to maintain the same level of discipline on all sides. The future of football is in the hands of these young ones, and we must do all to ensure it remains the same. One way is to ensure that is the rebirth of our leagues and give it the quality it desires. This is the only way we can have players who will go on to play for Super Eagles as well as top clubs in Europe. We will continue to work and support you where necessary and I must say that I am proud of what you have done.’’

However, Mohammed Sanusi, the General Secretary of NFF, lauded the minister for his commitment to the growth of the game.

“In a meeting the minister once had with the NFF board, he challenged us to ensure that we focus on other teams as well alongside the Super Eagles.

“That challenge has been in our minds and that is what we have seen today in the Flying Eagles team.

“The team left days earlier to Niger Republic ahead of the event and participated in friendly matches, which helped them acclimatize and better prepared for the tournament. This team has worked hard, and I am happy to present them to you and Nigerians.’’

Nigeria emerged champions of the seven-team tournament and have qualified for the 2023 U20 African Championship in Egypt.