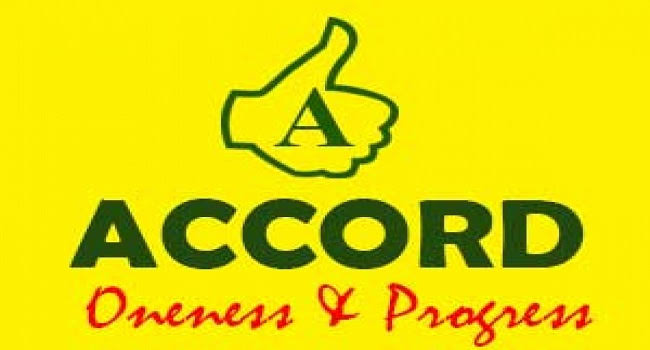 Accord Party has expelled an ex-officio member in Lagos State, Rev. Isaac Adeniyi over alleged anti-party activities, including alleged mismanagement of party funds during the last local government election in the state.

This is contained in a letter dated April 23, and addressed to the party çhairman in Alimosho Local Government where Adeniyi registered as a member in Ward MI(10)

The letter, signed by the Ward chairman, Sulaiman Abiodun and Secretary, Taiwo Oladehinde, respectively, also accused Adeniyi of also inciting factionalisation of Accord Party in Lagos State, just as it said he sabotaged the party’s candidate at the Electoral Tribunal.

The party also accused him of impersonating the chairman, adding that he has also refused to pay party dues accumulated over the past 14 years.

Similarly, it alleged that Adeniyi refused to remit the funds generated from sales of expression of interest and nomination forms in the 2019 general elections to the national secretariat of Accord, in accordance with the party’s constitution.

Other offences leveled against the ex- officio include collecting party funds without recourse to authority for doing same, just as the party further alleged that he enforced and supervised the signing up front of blank cheques by the state chairman during the last local government election and changing the account of the state chapter, without recourse to the executive, to his personal number.

The letter further reads: “We wish to bring to your notice the resolution of the Ward MI(10) in Alimosho Local Government Area of Lagos, the expulsion of Rev. Isaac Adeniyi, after careful deliberation of the offences committed and in line with the Constitution of the party under 20 Ai – Xii, Bi – V.

“A committee was set up to review the allegations and offences committed. All efforts to reach Rev. Isaac Adeniyi proved abortive as he fragrantly refused to honour the invitations of the committee. The Ward leader also called him severally, but he insisted on not honouring the invitation, claiming that the Ward lacked the capacity to summon him”.

In his response, the Local Government Chairman, Alhaji Lanre Adebeso, and Secretary, Adetomiwa Lamidi, acknowledged the receipt of the letter of suspension against Adeniyi in a letter to the state chairman, dated April 30.

“After careful review of the allegations in line with the provisions of the Constitution, we hereby affirm the decision of the Ward and refer the notice of the expulsion to the state for review and further actions,” the party leaders stated in a jointly signed letter.

Similarly, in a letter which the State chapter wrote to the national leadership of Accord, which was signed by the Lagos State chairman of Accord, Ola Beckley, the Vice chairman, Gabriel Aremu, and the acting Secretary, Lanre Ogundare, dated May 10, they acknowledged the receipt of the letter of expulsion against Adeniyi.

“We hereby affirm the decision of both organs in line with the provisions of the Constitution in article 20 Ai – Xii, Bi – V and hereby invoke Article ci7 (expulsion from the party),” the letter stated.