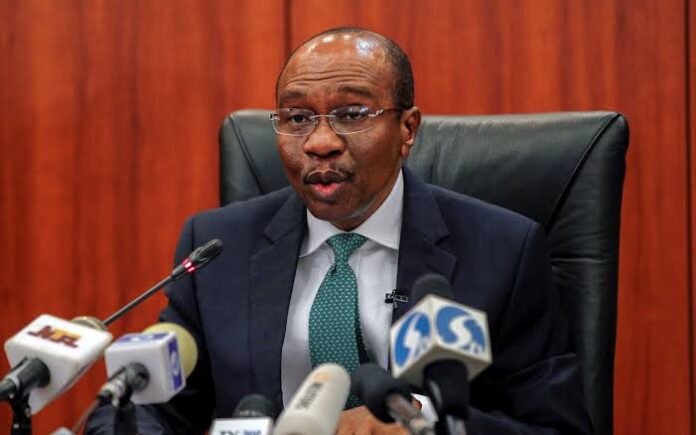 A group called South West Professional Forum, SWPF, Thursday, hailed the decision of the Central Bank of Nigeria, CBN, to raise the Monetary Policy Rate (MPR) to 13 per cent after two years.

The Forum pointed that the CBN Governor, Godwin Emefiele, is a man of foresight and a core professional who has been patriotic in handling the affairs of the economy along with his team of seasoned professionals, and added that the increase of the MPR to 13 per cent after two years was a step in the right direction to ensure the economy is sustained amidst daunting challenges from the global and local fronts.

The group said, “The Governor of the Central Bank of Nigeria, CBN, Mr Godwin Emefiele, is a patriotic Nigerian and professional to the core who has used his wealth of experience to keep the economy afloat despite global and local challenges.
“We want hail Emefiele and his seasoned team of professionals that is the Monetary Policy Committee (MPC) of the Central Bank of Nigeria (CBN) to vote unanimously to raise the Monetary Policy Rate (MPR) to 13 per cent on Tuesday, and indeed is a very crucial decision for national interest.

“We support the new MPR at 13 per cent because this will further consolidate on other policies the CBN have come up with and that would strengthen the economy, hence serving as a baseline interest rate in an economy, which other interest rates used within such an economy is built on it.

“And as the CBN boss has rightly said, ‘The sharp rise in inflation across both the advanced and emerging market economies has generated growing concerns among central banks as the progressive rise in inflation driven by rising aggregate demands and wage growth has put sustainable pressure on price levels’.

“We agree with him as he also explained that consequently, the major central banks such as the U.S. Fed, the Bank of England, European Central Bank, and Bank of Canada has provided strong guidance of a progressive shift away from monetary policy accommodation to drive market interest rate which may ultimately impact capital flows away from emerging market economies.

“On this we throw our weight behind his decision because it would add more value to the economy and allow businesses to thrive, and also attract investors in all sectors of the economy.”

The group also called on Nigerians to support the CBN Governor, and also to join hands with him to create a virile economy and conducive business environment for Nigerian businesses and those coming in.

Meanwhile, the group highlighted some salient achievements under the leadership of the CBN Governor since he has been in office, which it pointed that despite the harsh financial state of the country, he also introduced several policies to support the poor; the farmer’s Anchor Borrower Programme that just witnessed first of its kind of rice pyramid a few months ago.

“When Godwin Emefiele assumed office as the 10th indigenous Governor of the Central Bank of Nigeria on June 3, 2014, he promised to build a resilient financial system that can serve the growth and development needs of the Nigeria economy.

“Today, even the blind, deaf and dump can attest to the fact that the Apex Bank’s policies and programmes have been so designed in such a way that jobs are being created and fostering inclusive growth.

“In addition, to key macroeconomic concerns such as inflation and exchange rate stability in the country.

“He has been able to mobilize the private sector and salvage the situation, despite the harsh financial state of the country, he also introduced several policies to support the poor; the farmer’s Anchor Borrower Programme that just witnessed first of its kind of rice pyramid a few months ago.

“Through his people based policies, Nigerians have been offered numerous interventions and support for Small Medium Enterprises, SMEs and others.

“And this has created support base for local companies to be competitive, and evidently, this support culminated in the commissioning of the Dangote Fertilizer Company, and these are aimed at supporting Nigerian farmers to produce more food and also create jobs.

“Under his watch in CBN for the first time, he ensured diversification of the source of the economy from the oil sector to the non-oil sector.

“We can go on and on about Emefiele’s professional policy formulation that has been so all encompassing and not leaving any segment of Nigerians behind, but has carried Nigerians along with the policies and programmes of the CBN.”

However, the group in its address unanimously called on the Nigerian Policy Force to arrest those who have reported and spread fake news about the purported sack of the CBN Governor on Wednesday.

“We condemn those who just woke up from their mischief to relay fake news about the alleged sack of the CBN Governor on Wednesday.

“This is handiwork of some politicians who have nothing to offer because they have run out of steam and are only out to blackmail the CBN Governor with such sponsored fake news.

“We want to call on the Nigerian Police Force, and other relevant security agencies to go after and arrest those who are behind this fake news, and should be dealt with accordingly because this is not good for the image of our revered Apex Bank”, the group added.