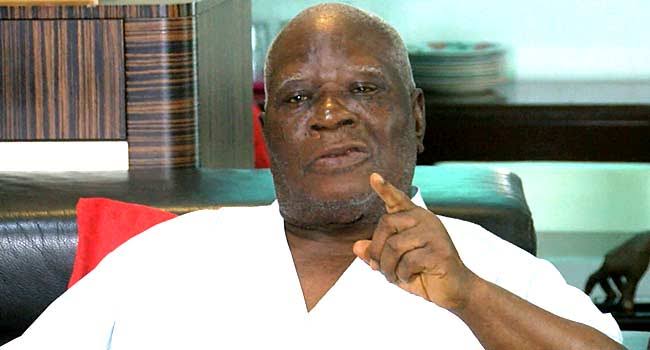 The Middle Belt Forum (MBF) has paid glowing tribute to elder statesman, Chief Edwin Clark, on his attainment of 95 years.

The Forum in a statement signed by its national president, Dr Pogu Bitrus, said Chief Clark has always led the struggle for a new Nigeria from the front and remains at the forefront of combating militancy as well as engaging critical stakeholders in the Niger Delta for dialogue, which has led to unhindered oil production and consequential increase in revenue generation.

According to the statement, Chief Clark’s commitment to the emancipation of the Minorities from the clutches of forces holding the jugular of these ethnic groups, remains unrivalled.

It stated, “he has become that undying metaphor that is neither tired of demanding for freedom nor weary in protesting against the enthronement of unconstitutionality within Nigeria’s flawed federal structure.”

In the same vein, the Minority Caucus in the House of Representatives yesterday paid glowing tributes to elder statesman and first Republic Minister of Information, Chief Edwin Clark on the occasion of his 95th birthday.

The caucus in a statement by the Minority Leader, Rep Ndudi Elumelu attested to the celebrant’s uncommon sense of patriotism and larger-than-life national image, manifested in his steadfastness towards unity, stability and development.

The caucus noted that despite his advancement in age, Chief Clark remained courageous, outspoken and relentless in his commitment to the entrenchment of the principles of the rule of law, social justice and true federalism with its tenets for fairness, equitable distribution of resources, mutual respect and regard for the sensibilities and rights of federating units.

It described Chief Clark as “an undisputed quintessence of purposeful leadership who serves as an abiding source of inspiration for national development as well as a beacon of light for the younger generation of leaders in the quest for a strong, united, secure and egalitarian society.”

“His commitment to the development of the younger generation of Nigerians is demonstrated in his selfless contributions towards the advancement of the educational system including the establishment of the renowned Edwin Clark University, Kiagbodo, Delta State, ” the statement said.

In felicitation with Chief Edwin Clark on the occasion of his 95th birthday anniversary, the caucus wished him more years in good health and service to the nation and humanity at large.