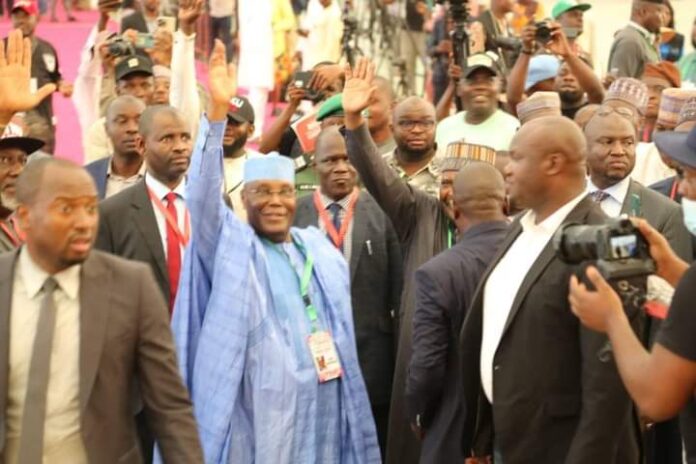 Former Vice President Atiku Abubakar emerged as winner of the PDP presidential primary with a total of 371 votes.

Sen. David Mark, the Chairman and Chief Retuning Officer of the PDP Special Convention, announcing the results, said total number of accredited delegates was 767, the total number of votes cast was 763, while 13 were invalid votes.

Mark said that “Abubakar haven scored the highest votes in the election is hereby declared the winner”.

He also announced the votes scored by other aspirants as Gov. Udom Emmanuel of Akwa-Ibom – 38 votes, and Gov. Bala Mohammed of Bauchi State – 20 votes.

Former President of the Senate, Sen. Bukola Saraki – 70 votes; and former Secretary to the Government of the Federation, Sen. Anyim Pius Anyim – 14 votes.

The only female Aspirant, Mrs Tari Oliver, and the former President of the Pharmaceutical Society of Nigeria, Mazi Samuel Ohuabunwa scored one vote each.

The News Agency of Nigeria (NAN) reports that former governor Peter Obi of Anambra had earlier withdrawn from the race and resigned from the party.

Others that withdrew from the race were financial expert, Mohammed Hayatudeen, Gov. Aminu Tambuwal of Sokoto State and Dr Nwachukwu Anakwenze.

Abubakar contested for the office of the president several times, including 2014, when he ran on the platform of the All Progressives Congress (APC) and lost at the primaries to incumbent President Muhammadu Buhari.

He also run as the PDP presidential candidate in 2019, but lost president Buhari of APC.