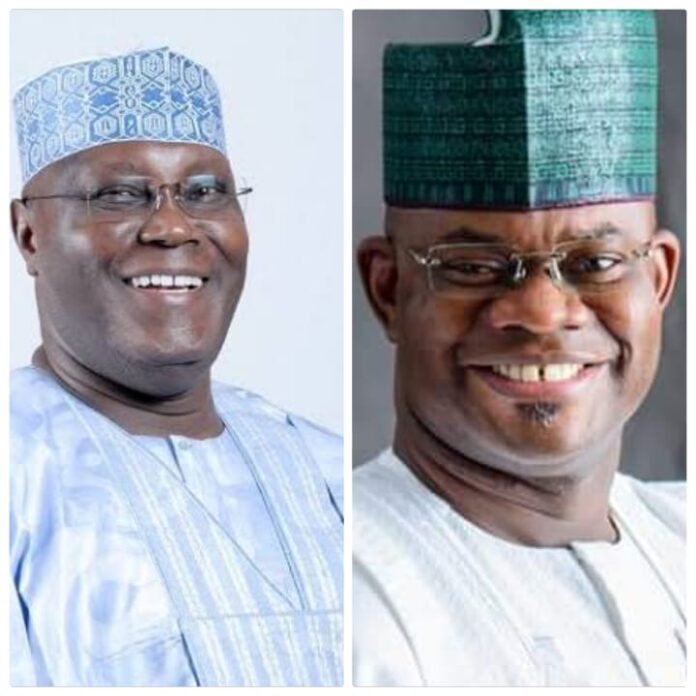 Prof Chris Mustapha Nwaokobia Jnr.
Convener COUNTRYFIRST MOVEMENT and also Leadership And Mentorship Instructor has called on the APC delegates to ensure Gov. Yahaya Bello gets the presidential ticket in the forthcoming convention.

Nwaokobia In a press statement said the PDP ignored the urgency of now and the call for tendency by choosing a 75years old.

Part of the statement reads: “Clearly the Peoples Democratic Party PDP has shown its disregard for the urgency of now, and has displayed manifest arrogance by ignoring the call for new tendency in leadership. They chose a 75years old (forgetting the truth put before us by President Muhammadu Buhari, that if he were younger he would have done much better). To the PDP however, anything goes. They mouth redemption without the sincerity of purpose to follow it through, little wonder the choice of the former Vice President Atiku Abubakar to lead their charge for the 2023 Presidency. Indeed they do not care a hoot about what the People think or want”.

“In the highly monetized Presidential Primaries of the PDP, the Delegates chose their belly and their pocket over Nigeria. They forgot the urgency of now. They threw away the call for competency, youth and capacity. They chose wads of dollar over the call to elect a candidate who will put Country first. They sacrificed the call for a new order, and by electing a doyen of the old order Atiku Abubakar, they inadvertently threw the baton to you”.

“They disregarded Youth, competency and Capacity, all they do afterall is to mouth support for the New Order when they politic, but their heart is far from it. The onus is now on you not to let the Country down, Dear APC Delegates”.

“The history of Nigeria is replete with the fact that the best of times happened when leaders in their 30s, 40s, and 50s were in the saddle. The First Republic had the Azikiwes, the Osadebes, the Sardaunas, the Balewas, the Eyo Itas, the Awolowos, the Enahoros et al in that age bracket. They could burn the candles, they could work and walk long hours for Nigeria, and they could debate long hours to fashion a workable economic blueprint and development policy for Nigeria, perhaps that goes to tell why the First Republic remains the best in our history”.

“Under the Military we saw the explosion in the Oil Sector, Refineries were built, a Shipping line and an Airline proudly owned by Nigeria spouted and blossomed, Cities were built, major connecting bridges like the 3rd Mainland Bridge came alive, and the Federal Capital territory Abuja was built. The records are unarguably profound, this reference is a plus for youth, for competency and capacity, and not for Military Rule. The point here is that the most halycon days of this Country were when leaders in their 30s, 40s and 50s held the levers of power. But such historicity is lost on the PDP, however they should matter to you, Dear APC Delegates”.

“Do not forget that Governor Yahaya Bello GYB as the Governor of Kogi State has the largest number of Young people in his cabinet. Do not forget that he runs the government with the highest gender parity in Nigeria. Do not also forget that when he marshalled the APC’s membership mobilization and revalidation drive as the Chairman of the Committee on Youths, Women and the Persons With Disability, the Party overtook the PDP by becoming the most populous Party in Africa. I dare say that if GYB could mobilize as much as 20milion Youths, Women and Persons with Disability into the APC he can beat Atiku Abubakar at the polls before 2pm on election day, and this truism is incontrovertible since he is at home with those who predominate our voting population”.

“Need I remind you Esteemed Delegates of our great Party, that the greatest issues in today’s Nigeria are those of Security, of health, and of Education. Do you know that with Governor Yahaya Bello GYB we shall be go into the 2023 elections with more than bragging rights. It is on record that GYB is the Best Performing Governor in Nigeria in the area of Security. It is on record that Kogi State is the only State in today’s Nigeria where tertiary institutions (University, Polytechnic or College of Education) are not on strike, not one. And it is on record that under his watch Kogi State is completing the most outstanding medical facility in Nigeria. GYB shall be facing Atiku Abubakar with a deafening resume’. He will come to the contest with Youth, with vivacity, with strength, with candour, and above all with competency, with capacity and with a record of outstanding performance and fiscal discipline”.

“Conjecture the odds, check the optics, imagine the picture of a Tinubu against an Atiku, and watch how the largest voting demography will spurn the two major political parties, and settle for perhaps a Third Force. Put GYB against Atiku, and watch the people exhale in profound appreciation, because then the stage will be set for the long overdue duel between the forces of progress and the forces of old, between new ideas and old ideas, between individual (lifelong ambition) and the passion, commitment to progress and challenge for the soul of Nigeria which GYB epitomizes”.

“At the Polls GYB will connect with the young and the old. He will connect with Women having been their greatest benefactor in contemporary Nigeria, do not forget that he heads the government with the highest gender parity in Nigeria? He will connect with the North and the South being the Governor of the Confluence State, and leading a State that has become a rainbow coalition of sorts having reduced ethnic and religious distrust to the barest minimum. He will connect with the END-SARS generation because he belongs to them, as the youngest serving Governor in today’s Nigeria, he is their own. He will connect with the persons with Disability because more than any Governor in today’s Nigeria he has empowered the greatest number of the persons with Disability, go to Kogi State and you will see them serving at different levels in his government. And he will not only connect with the many victims of insecurity but bring them great hope, because as the Governor of the only State in Nigeria with 10 borders (nine States and the Federal Capital Territory, Abuja) he took Kogi State from one of the most unsafe States in Nigeria where Boko Haram once had an IED making plant, to the second safest State in Nigeria. GYB is unarguably the best answer to the challenge of the PDP, and indeed the answer to the generational challenge for the soul of our nation”.

“Dear Delegates of our great Party, may the waters of patriotism and love for nation guide your decision, may the promise of HOPE 2023 propagated by GYB and the smartest team of political ideologues and economic experts ever assembled by any Aspirant in our nations history, resonate. And may you put before Nigerians a candidate that will birth and berth the Nigeria of our collective dreams. God Bless You All”.