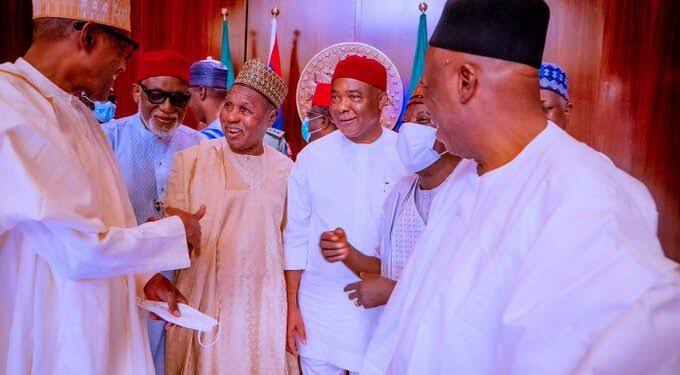 *Solicits support of Govs, stakeholders in his choice of who succeeds him

*Asks them to reciprocate his gestures to them, concede to his choice of flag bearer

Finally, President Muhammadu Buhari yesterday told the governors elected on the platform of the ruling All Progressives Congress (APC)that they should reciprocate earlier gestures extended to them by conceding to him the right of choosing the party’s presidential flag bearer.

The president met with the 22 governors of the party and the party’s national chairman, Sen. Abdullahi Adamu at the Aso Rock Villa shortly before the president jetted out to Spain on a state visit.

The implication of the president’s directive is that the party would likely present a consensus candidate during this weekend’s Special convention to select its presidential flag bearer scheduled for Abuja.

Nigerian Pilot had last week exclusively reported that the APC would likely adopt a consensus candidate as her presidential flag bearer for the 2023 presidential poll.

President Buhari said, “As we approach the Convention, I appeal to all of you to allow our interests to converge, our focus to remain on the changing dynamics of our environment, the expectations of our citizens and the global community.

“Our objective must be the victory of our party and our choice of candidate must be someone who would give the Nigerian masses a sense of victory and confidence even before the elections.

“In keeping with the established internal policies of the party and as we approach the convention in a few days, therefore, I wish to solicit the reciprocity and support of the governors and other stakeholders in picking my successor, who would fly the flag of our party for election into the office of the President of the Federal Republic of Nigeria in 2023.

“I wish to assure you that the consultation process shall continue to ensure that all aspirants and stakeholders would be brought on board right through to the convention. This would also ensure that any anxiety occasioned by different factors is effectively brought under control and our party emerges stronger”, he said.

President Buhari also told the governors that the party had successfully established internal policies that promote continuity and smooth succession plans even at the state and local government area levels.

His words, “For example, first term Governors who have served credibly well have been encouraged to stand for re-election. Similarly, second term Governors have been accorded the privilege of promoting successors that are capable of driving their visions as well as the ideals of the party.”

Speaking on behalf of the governors, Kebbi state Governor, Atiku Bagudu said that the party must build on her earlier successes “and come up with a candidate who will walk in the footsteps of patriotism and love for the country which Mr. President has shown.

We will support Mr. President to have a successful convention”.

The governors after the charge from President Buhari later converged at the residence of the National Chairman of the party for further briefing. It was not clear as at the time of going to press the resolutions they reached.

In spite of President Buhari’s position, the party’s Presidential Screening Committee led by former governor of Edo state, Mr. John Odigie-Oyegun yesterday continued the screening of the aspirants which was expected to have ended last night.