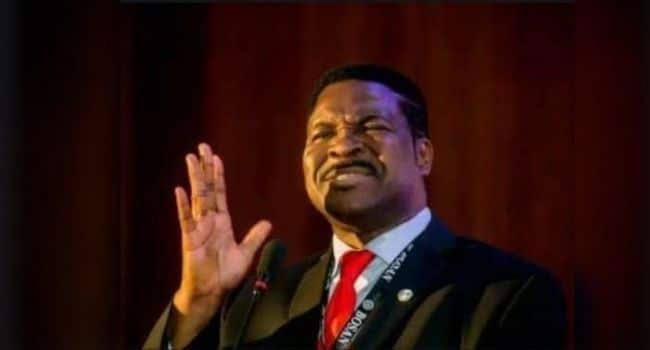 The legal icon hails from Iviukwe town, near Agenebode in Etsako East Local Government Area of Edo State, Nigeria. This pro-masses prodigy attended St. Mary’s Catholic Primary School, Iviukwe, and St. Peter’s College, Agenebode, both in which he made the best graduating results. Baptist Academy, Lagos, in 1975 and the University of Ife (now Obafemi Awolowo University), (Ile-Ife), wherefrom he graduated in 1980, after losing one academic year to enable him change from his English language original course of study to law, his passion.

His university internship was always with fiery peoples lawyer, late Kanmi Isola-Osobu, while his NYSC was with the Federal Ministry of Justice, Yola, and later, Lagos, wherefrom he was seconded to the then National Provident Fund, Lagos.

By 1982, Dr Mike Ozekhome was back to Ife to pursue his Masters degree programme in Law. He also lectured simultaneously, and thereafter, at the same Law Faculty. Many of his students are today Judges, Justices of appellate courts, Senior Advocates of Nigeria, top entrepreneurs, Diplomats, Captains of Industry, top military brass and Professors. He later joined the ever busy and pro-masses chambers of the late Chief Gani Fawehinmi, where he worked, first, as a junior counsel, later as a senior counsel; and finally rose to the highest position of Deputy Head of Chambers by 1985.

Ozekhome has handled many epochal cases that have helped to define and shape the legal regime and Nigerian legal jurisprudence, thus helping enthrone a favourable climate for the sustenance of human rights, democracy, good governance and the rule of law.

In 1986, he founded the law firm of Mike Ozekhome’s Chambers, with thriving offices in Lagos, Abuja, Benin City and his home town, Agenebode. His law firms handle many cases probono.

Using law as an instrument of socio-economic and political engineering, Ozekhome in 1987 co-founded the Civil Liberties Organization (CLO), the first human rights organisation in Nigeria. He was the pioneer Director of Legal Services and member of its Governing Board. In 1998, he co-founded the Joint Action Committee of Nigeria (JACON), with the late Chief Gani Fawehinmi, who was chairman. Ozekhome was the National Vice Chairman, publicity and publications. He had, earlier in 1992, solely founded the Universal Defenders of Democracy (UDD), an international human rights and pro-democracy league. He also founded the Democratic Rights Agenda (DRA) and Peace Initiative (PI), a peace building and conflict resolution centre. Ozekhome was frequently detained several times, starting from 1986, on account of his human rights and pro-democracy activities, especially during despotic and repressive military juntas.

Ozekhome has received over 300 awards and honours, both locally and internationally. He holds the honorary Doctor of Laws (LL.D), Doctor of Letters (D.Litt), Doctor of Administration (DA), Doctor of Jurisprudence (JD), Doctor of Letters (HonDL), Doctor of Philosophy (Ph.D), from various Universities in USA, United Kingdom, Israel, Nigeria and Belize City, Belize, Central America. A Paul Harris Fellow of Rotary International, Dr Ozekhome is an International Ambassador of Peace, honoured with the Global Peace Loving Citizen of the World, (GPLCW), the highest honour given out by the Universal Peace Federation (UPF).

Ozekhome’s passion for justice pitches him now and again with authorities and ruling powers. He fights for the defenceless. He gives voice to the voiceless; empowers the weak, the poor, the denied, the pauperized, the traumatised, the marginalized, the hopeless, the oppressed, the hapless, the repressed, the subjugated, the ignored, the forgotten, and the struggling members of the hoi-polloi and Frantz Fanon’s “Wretched of the Earth”.