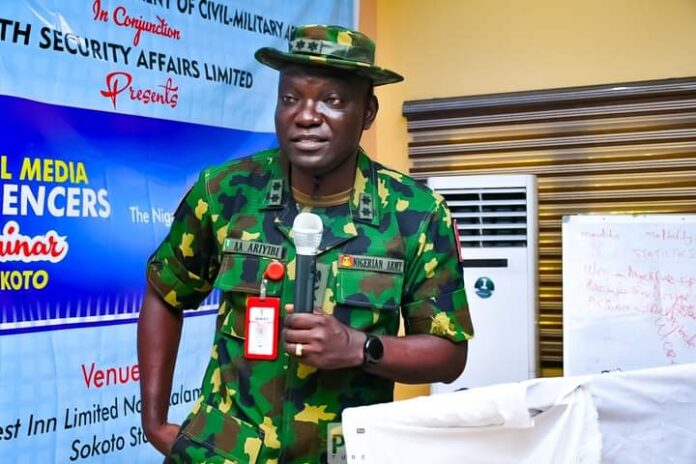 The department of Civil Military Affairs Nigerian Army in conjunction with the security affairs limited has organised seminar for social media influencers , bloggers and online Journalists in Sokoto State.

Speaking at the event on Friday at Sokoto Guest Inn the chief of army staff (COAS) Lt General Farouk Yahaya said the 20th edition of this seminar with a theme : The Nigerian Army’s Non- Kinetic lines of operation : Role of the social media is an avenue to interact with the civil populace to foster a harmonious and cordial civil – military relations.

Represented by the chief of the civil military affairs Maj General Marcus Kyangye , Farouk added that the seminar which started in 2018 have achieved its desired goals.

He called on socially the media influencers, bloggers and online Journalists to rally support for the Nigerian Army and also encourage them to enlighten the general public on the dangers of misinformation , fake news for the general security of the country.

He enjoined the media to see the military as partners and avoid reports that would portray the institution in a bad light.

He maintained that the seminar became imperative having understood that millions of Nigerians rely on social media platforms as their source of information hence the need for the influencers and online Journalists to fact- check every information at their disposal before sharing on their various platforms and websites.

On his part the executive director security affairs limited a group partnering the Army on the training Austin Peacemaker said alot of issues that would have snowballed into protracted face-off between the military and public have been resolved amicably as a result of public enlightenment.

He implored the media to take advantage of the robust platform created to ensure that security reports are handled more professionally as that would further engender peace in the country.

Earlier the chairman conference of civil society of Nigeria (CCSN) Comrade Adams Otaku urged Nigerians to support the Nigerian Army to enable them defeat the common enemies of the country.

He noted that pen is mightier than the gun hence the need to support Nigerian Army in our reportage.

He maintained that the genocide in Rwanda is as a results of fake news and reckless reportage of the media in that country.

He stated that with the support of Nigerians , Nigerians Army will soon triumph over the security challenges facing the country.