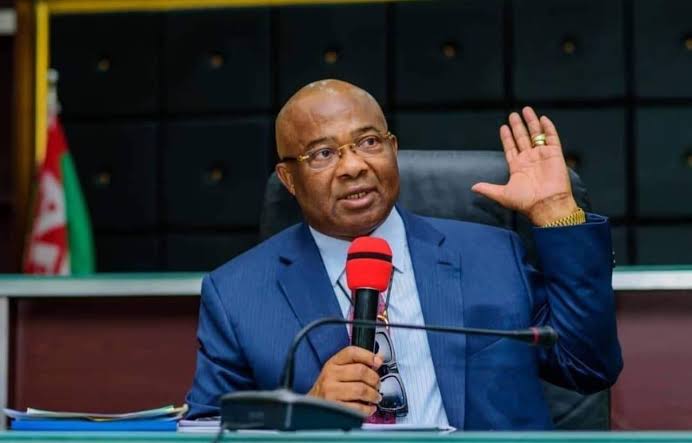 Imo State Government has described as false the news making the rounds that the state Governor, Hope Uzodiinma was hit by a stroke and had been flown to India for emergency medical attention.

The Commissioner for Information and Strategy, Declan Emelumba in a statement in Owerri, the state capital said that the governor was hale and hearty.

Emelumba said that the governor was currently in Abuja partaking in the activities leading to the forthcoming presidential primary of the All Progressives Congress, APC.

The Commissioner said the purported news of the governor’s ailment was being peddled by the enemies of the state.

The statement read “Imo State Government has dismissed as unfounded, wicked and mindless fabrication, a recorded voice message making the rounds in the social media claiming that Governor Hope Uzodimma is down with a stroke and has been rushed to India. The satanic message even claimed that he could not make it to India.

“Reacting to the voice message in Owerri yesterday, the state Commissioner for Information and Strategy, Hon. Declan Emelumba in a statement assured the people that Uzodimma is not only hale and hearty but has been energetically attending to all his scheduled activities in the nation’s capital, Abuja.

“He said those behind the satanic rumours are descendants of Lucifer who are vainly wishing evil on the governor.

“According to him, Uzodinma is not afflicted with any challenge that would have led to a stroke.

“His Excellency attended a meeting with the President alongside other APC governors this morning. As I speak, he has entered another party meeting with other stakeholders ahead of APC’s convention. So I don’t really know what those concocting this rumour want to achieve”, Emelumba said.

“The Commissioner warned the purveyors of the rumours to desist forthwith before they suffer unmitigated disaster.

“According to him, it was clear that those who do not wish the governor well have been fantasizing about a phantom illness, saying however that they will continue to be disappointed as Uzodimma is enjoying robust health and attending to state duties.

“He said the matter has been handed over to the relevant security agencies to unravel those behind the satanic audio recording.”