HomeNewsDisregard The Falsehood The APC Has Not Zoned Power To The South...
News 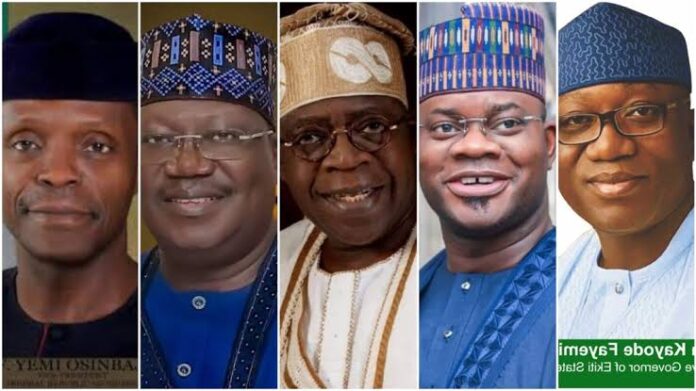 Prof Chris Mustapha Nwaokobia Jnr, the Convener “APC TRUTH FORUM” has said
The news making the rounds about the zoning of the APC Presidential Ticket to the South at the behest of certain Northern Governors in the APC is manifest falsehood and hubris.

Nwaokobia Jnr in a press statement said: “The truth is that in compliance with the directive of Mr President that Governors should meet to discuss on the possibility of a consensus candidate for the Party, the Governors met on the 4th of June, 2022. And some 11 Governors from the North who are clearly interested in being Vice Presidential Candidates to their friends from the South allegedly agreed albeit selfishly to support a candidate from the South, and mandated three Governors amongst them (Simon Lalong of Plateau State, Governor Sule of Nasarawa State and Governor Bagudu of Kebbi State) to broach the idea with Mr President, knowing the mischief being hatched by Governor El Rufai and his Team, Mr President refused to meet with them, and reiterated his position, that the Presidential Aspirants in the Ruling Party the APC should find a formidable consensus candidate amongst themselves. The President did not approve of any zoning to the South or the North”.

“No communique to the effect that Northern Governors have conceded the Presidential Ticket to the South was indeed signed, the one purportedly released to the Press by some Northern Governors was the creation of Governor El Rufai who attached excerpts of a previous attendance register signed by Northern Governors to the communique drafted by him. Note that the tradition of the Northern Governors when releasing a communique is to sign against their names, the criminal disparity in the document presently in circulation can be seen from the documents attached to this Press Statement. In the so-called Press Statement released by the Governors you will notice that the signatures appeared on a new page as opposed to the valid and authentic tradition of the Governors signing on the Communique page and against their names. It was meant to deceive, to heat up the polity and to an egocentric end for those seeking to be Vice President”.

“The general public is hereby put on notice that Mr President, and indeed the All Progressive Congress has not zoned the Presidential Ticket of the Party to the South or the North. And disregard the ignoble mischief of certain political operators out to feather their selfish nest”.

“We implore the media to discountenance the falsehood making the rounds. And call on the esteemed delegates of our great Party to vote for the candidate they consider fit, proper, competent, youthful, formidable and possessing the ability and the capacity to lead our great Party to victory in the 2023 Presidential Election”. He said.