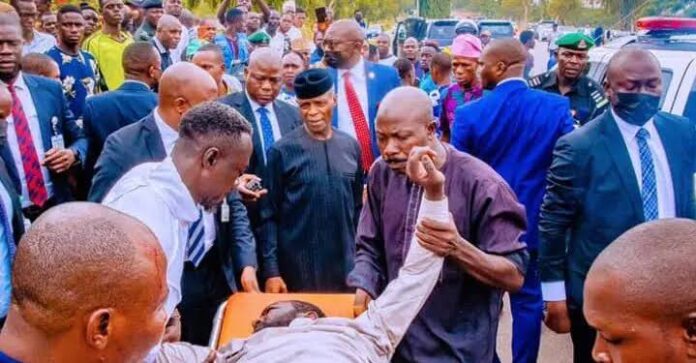 Laolu Akande, Spokesman for Vice President Yemi Osinbajo has refuted claims that his principal was involved in a car crash on Monday morning in Abuja.

There had been earlier reports on social media that the VP was involved in an auto crash on Monday morning.

But the Presidency clarified that Osinbajo only stopped his convoy on his way to the airport to rescue victims of an auto crash.

Akande further stated that Osinbajo has arrived Owo in Ondo State, where around 50 worshippers were heinously attacked and killed at St. Francis Catholic Church.

“On his way to the airport this morning, VP came across a road traffic accident, stopped to lend assistance, & ensured the victim was taken to the hospital with VP’s convoy ambulance.

”He then proceeded on his trip and is now in Ondo State heading to site of yesterday’s attack in Owo,” Akande said in a statement.