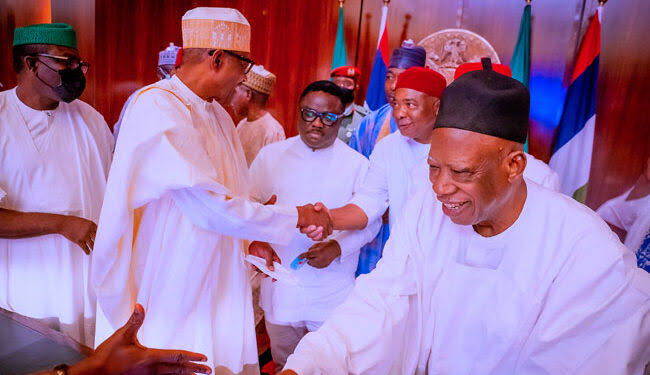 *As all 23 Presidential aspirants reject consensus arrangement, opt for polls

*Asks aspirants who lost to maintain spirit of sportsmanship

After so much drama, suspense and intrigues, primaries of the ruling All Progressives Congress (APC) began yesterday till early hours of today.

The event which had been many times postponed began without the expected coronation of the Senate President, Dr Ahmad Lawan.

The primaries saw former Lagos State Governor and one of the national leaders of the party, Senator Bola Tinubu coming on strong as he had many aspirants stepping down for him.

At the end of the day, seven out of the 23 aspirants stepped down from the race to pull their support behind Mr. Tinubu.

One of the aspirants, Barr Felix Nicholas, however stepped down for Vice President, Yemi Osinbajo.

Addressing delegates at the venue of the convention, Tinubu described himself as a unifier and one the moment the country calls for.

“I come to you with a coherent vision on how to improve our nation such that our schools, industry, agriculture and infrastructure will become the pride of all. Ours shall be a land where all Nigerians will have an equal chance and no one is excluded because of his ethnic background, religious creed, place of origin or social station. We are all Nigerians.

“By this statement, I seek your help and support to become our party’s nominee and standard bearer in the coming February 2023 elections. To lead Nigerians is a sacred trust, which I do not take lightly or seek selfishly, by giving me the party’s mandate, I hereby make a solemn vow to make Nigeria the best home for its citizens.

“As an indivisible, united country, we shall overcome the destructive forces attempting to steal our destiny. May the triumph of our democratic journey be complete and serve as an exemplar to Africa, our race, and the rest of mankind. We were born for this moment. Let us now make the most of it”, he said.

In his special address, President Muhammadu Buhari asked aspirants who lost to maintain the spirit of sportsmanship and support the winner to win the next year’s election.

Buhari also urged the Primary Election Committee to provide a level playing field for all aspirants while urging all delegates to abide by all extant laws.

In his address, Vice President Yemi Osinbajo told all delegates that their votes will determine the future of their children.

Osinbajo said: “So, you cannot wish this country well and vote for someone you do not believe in.”

The APC Presidential Convention was filled with so much tension, intriguing and interesting moments as all 23 presidential aspirants, prior to the commencement of events, had opted to test their strength at the ballot as the consensus arrangement planned by the party hit the rock.

Recall that there was a spirited effort to come up with a consensus candidate ahead of the convention but the move collapsed at the last minute.

This was largely due to the fact that the presidency, the APC governors and the leadership of the ruling party were not on the same page even though several marathon meetings were held to mend fences so that their differences would not manifest at the Eagle Square.

His position was however contrary to the position of most Northern Governors who had earlier agreed that power should shift to the South come 2023.

Adamu had made the announcement at the meeting of the National Working Committee (NWC) Monday in Abuja, but members of the NWC kicked against his position insisting they stood with the position of the governors.

At one point, there were reports that the APC Governors had reduced the number of aspirants to five and have submitted the names to President Muhammadu Buhari. The five aspirants were Asiwaju Bola Tinubu, Hon Chibuike Amaechi, Prof Yemi Osinbajo, Dave Umahi and Kayode Fayemi.

Another report had it that the names had been pruned to three with Fayemi and Umahi opting out.

Confirming the report, a member of Osinbajo Campaign Organization and Chairman of The Progressive Project, TPP, Kabiru Gaya, had hinted that stakeholders of the party have been able to trim down the list of presidential aspirants of APC to two.

Gaya said only Osinbajo and Tinubu are now remaining in the race.

But Nasarawa State Governor and Chairman of Media and Publicity of APC National Convention, Abdullahi Sule, later denied that Governors in the party have pruned down the number of candidates for the primary to three from five.

While governor Sule said President Muhammadu Buhari would have preferred a consensus candidate to reduce rancour, he added that the party was set for an election in the event that the 23 candidates do not agree on a consensus arrangement.

Speaking during a television interview at the venue of the convention, Tuesday, Sule said: “People are actually mistaken and forgetting what the Electoral Act says. The governors have no power to reduce the number of aspirants, not even the party. According to section 84 subsection 9 to 10 of the Act; it shows clearly that if one person says I am not going to withdraw, then, there is going to be an election.

He said: “As far as we are concerned, we are ready for election, and if all the 23 people that are there are screened by the party and allowed to vote, we will conduct an election.”

Angered by the development; Kogi State Governor and one of the presidential aspirants from the north, Gov. Yahaya Bello kicked against such an arrangement warning that the APC would be calling for bigger trouble if he was excluded from the list of aspirants at the party’s convention.

The Kogi State Governor said he was at the Presidential Villa to explain to President Muhammdu Buhari his reasons for walking out of a meeting with fellow aspirants in Abuja on Monday.

He stressed that he was not consulted before what he called the unilateral decision on the choice of candidate.

The aggrieved aspirants, in a statement issued in the early hours of Tuesday shortly after a brief meeting in Abuja, distanced themselves from the purported list.

Speaking before the commencement of events, Governor of Imo state and Chairman of the Central Planning Committee of the Convention Senator Hope Uzodinma assured that the presidential primary election would be free, fair and transparent.

According to him, “Our party has always proven opposition wrong and we will proof that today with free, fair and transparent election.”

While delivering his opening address, National Chairman of the APC, Senator Abdulahi Adamu, said President Muhammadu Buhari’s successor must be someone who shares his ideals.

Adamu added that Buhari’s successor must also be someone with the capacity to boost the nation’s economy and deliver good governance.