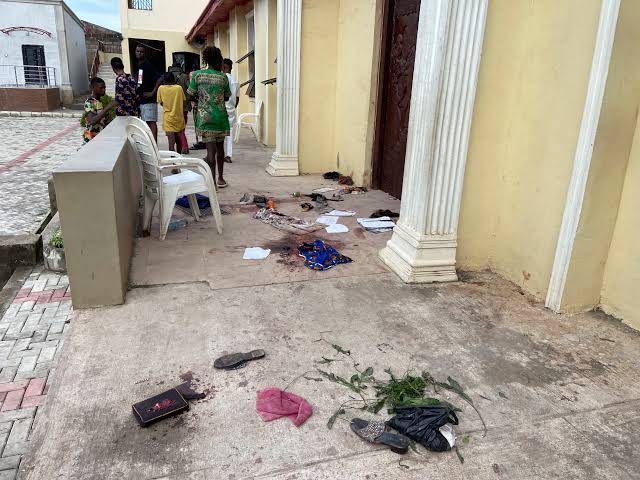 Women groups under the aegis of Womanifesto have strongly condemned the attack on St. Francis Catholic Church, Owo in Ondo state on June 5 which left dozens of people, men, women and young people dead and many others critically injured.

A statement signed on behalf of the women groups by the Co-Convener of Womenifesto, Dr. Abiola Akiyode-Afolabi, said the hearts of members of the groups go out to the families, friends and loved ones of all those affected by the vile and evil act.

It said the members of the groups also commiserated with the Catholic Community and entire people of Ondo state.

“This cold-blooded massacre in St. Francis Church is yet another evidence of the blatant disregard for human life and the incessant murder of defenceless citizens by criminal gangs who have been marauding unchecked across our country.

“As a result, thousands of people are widowed and children orphaned. It is reported that over 3, 515 people have died as a result of violent attacks between January and June, 2022, with 1, 214 deaths in March, ranking higher than the 996 deaths recorded in January (Nigeria Security Tracker).

“The Owo massacre, in which citizens in their place of worship were killed, again raises the question of governance failure considering that our 1999 Constitution asserts security and welfare of citizens as a primary responsibility of the government. The same Constitution centralizes the command and control of security establishments in the Federal Government through the President of Nigeria as Commander-In-Chief of the Nigeria Armed Forces”, the statement noted.

The statement quoted a report that said that no fewer than 14, 641 people have been killed across the six regions in Nigeria in the past three years, and in just the first 5 months of this year, about 3173 have been killed and more than 2293 abducted in similar circumstances.

It said it is unfortunate that the failure of the government to properly investigate or take tangible actions to ensure justice or deter future occurrences continues to exacerbate the crises.

The statement further observed that since this administration was inaugurated in 2019, the herdsmen and banditry attacks have risen exponentially as the government has failed to demonstrate the capacity to address the insecurity plaguing the country.

“We therefore call on President Mohammadu Buhari, the Federal Government, the Nigeria Police and all other relevant federal law enforcement agencies to take immediate measures beyond condemning this barbaric act and end the insecurity in the country.

“Womanifesto demands in the medium term, a comprehensive restructure of Nigeria’s security architecture through a National Conversation on a new Constitution to replace the problematic 1999 Constitution.

“In the immediate term, however, we demand the following actions by the Federal and Ondo State Governments, to publish the identities of all the victims of the Owo tragedy including those that died as well as the injured.

“Demonstrate accountability and carry out a speedy investigation that is conclusive – leads to arrests, successful judicial prosecution and sentencing of the killers, make immediate contact, provide constant updates and appropriate succour for all the families of victims of the tragedy by the Federal and Ondo state governments.

“Present as a matter of urgency, a state of national security status report to Nigerians in fulfillment of the constitutional duty of the President and the security agencies and transparently communicates the performance of the security establishments in light of the huge budgetary provisions allocated annually to the counter-terrorism war”, the statement added.