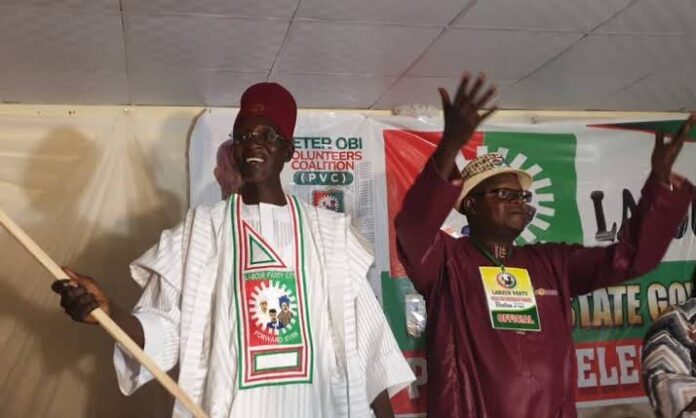 Ambassador Yohnna Margif has clinched the Labour Party LP ticket to run for the Governorship seat of Plateau State in the 2023 general elections.

At the primary election held in Jos on Thursday ,the 85 delegates, five each from the 17 councils of the State unanimously affirmed Margif as the candidate in the presence of INEC officials, security personnel, Media and supporters of the party.

National Chairman of the Labour Party, Comrade Julius Abure who conducted the Primary election said the Labour Party is the party that will liberate the masses from the poverty that the APC and PDP brought to Nigerians.

Represented by comrade Joseph Ndirang ,he noted that the manifesto of the Labour Party is to present credible and quality candidates during the General elections that will focus on Education, Health, Security, economy and the welfare of Nigerian Workers.

The Labour Party Candidate Ambassador Yohanna Margif in his acceptance speech after being declared winner said he is convinced that he will be the next Governor of Plateau State after Lalong, saying the party will work together to ensure the success of the election come 2023.

“I promise never to waiver or fail. I promise to energize and mobilize our teaming supporters in the next phase of the struggle, I put myself to the task knowing full well that the foundation laid by our founding fathers must never be destroyed but built upon”.

The State Chairman of the Labour Party, Plateau State, Comrade Mrs. Grace Zamfara said they will work together with Plateau people to ensure that Ambassador Margif is elected as the Governor of Plateau State Come 2023.

It would be recalled that Chief Margif who is the Wazirin Mushere was a member of the APC and had purchased the APC governorship nomination, but later defected to Labour Party while citing imposition of Candidate.