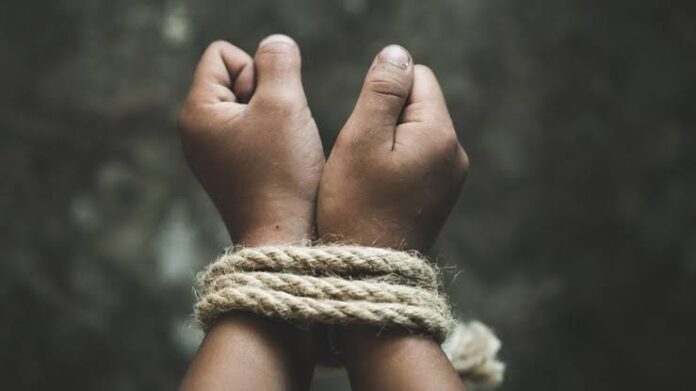 *Bishop Aderogba, others were kidnapped at 8.30pm Sunday along Oyo/Ogbomoso Expressway

*As Police confirm abduction of 3 Missionaries in Kogi state

Amidst rising cases of violent crimes across the country, gunmen have reportedly kidnapped the Anglican Bishop of Jebba Diocese, Kwara State, Rev. Oluwaseun Aderogba, his wife and driver.

The victims were said to have been kidnapped around 8:30 pm Sunday at Oyo/Ogbomoso Expressway while trying to fix their car that broke down on the road.

When contacted, the Spokesperson of the Kwara State Police Command, SP Okasanmi Ajayi, said “we heard it just like you, and we are ready to render any technical assistance to rescue the victims.”

In a related development, Catholic priest of St Anthony’s Parish, Angware community in the Jos East Local Government Area of Plateau State, Rev James Kantoma was also reported to have been kidnapped by gunmen.

Our correspondent gathered that Kantoma who is also the Chairman of the Christian Association of Nigeria, CAN in the council area was abducted at his house in the community by the gunmen on Monday morning.

The State Chairman of CAN, Polycarp Lubo, confirmed the abduction of the cleric to our correspondent, describing the incident as unfortunate.

Lubo said, “Since the gunmen took the Reverend Father away, we have not heard anything either from him or the abductors up till this afternoon (Monday). This is so sad. But we are praying for him that no harm will befall him wherever he is.”

A resident of the community, Paul Aware confirmed the abduction of the Reverend father to our correspondent in Jos on Monday.

He said, “When the gunmen arrived at the community early hours of Monday morning, they moved straight to the house of the Reverend Father.”

“Some youths in the area who were alerted tried to stop and even gave them a hot chase into the bush but the gunmen started shooting everywhere and eventually took the Reverend Father away”, he explained.

When contacted, the Police Public Relations Officer of the State Command, Alabo Alfred said that the Command was aware of the incident and had deployed officers and men from the anti-kidnapping unit to the community.

“Our men are already working to ensure that the Reverend father regains his freedom and apprehends those behind the abduction,” the PPRO further added.

He called for calm saying the police are on top of the situation.

Meanwhile, the Police in Kogi state yesterday confirmed the abduction of three missionaries by gunmen suspected to be kidnapers.

According to the police, the abducted missionaries are Evangelist Peter Adigidzi, Pastor Mike Baba and Pastor Sunday Abah, all working with Child Evangelical Fellowship (CEF) and are residents of Lokoja.

The State Commissioner of Police, Edward Egbuka who confirmed the incident in Lokoja said they got a report from the Children Evangelism Ministry that three of its missionaries were abducted.

“We are aware of the unfortunate and worrisome incident and have taken drastic measures to track down the suspected abductors to rescue the clerics,” Egbuka said.

According to him, the police tactical team had been deployed to strategic places in search of the victims and to arrest the kidnappers to face the wrath of the law.

The Kogi Coordinator of Children Evangelism Ministry, Evangelist Charles Esho explained that the victims were on an assignment at Ejule Community in Ofu Local Government Area of the state when the incident occurred.

Esho appealed to the security operatives to assist in searching and rescuing the missionaries to unite them with their family members.

“As a ministry, we are passionately appealing to the security operatives to do something drastic to rescue the clerics from their abductors.

“We are all worried over the safety of the abducted brothers as we don’t know where they (abductors) have taken them to as up till this moment there’s no word from them,” he said.

The clergyman called for prayers for the safety and divine rescue of the victims within the shortest possible time.

It would be recalled that the Prelate of Methodist Church Nigeria, His Eminence, Dr. Kalu Samuel Uche was also kidnapped three weeks ago.

He was abducted along the Ihube-Leru-Isuochi Road in Umunneochi Local Government Area of Abia State.

He was however released after paying a ransom of N100 million.