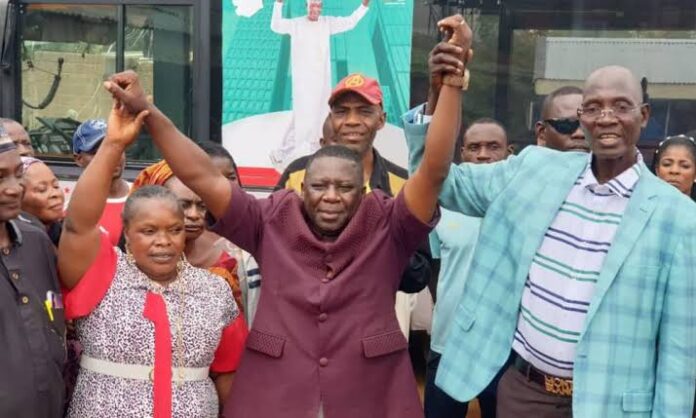 Candidate of the Plateau State Labour Party for the forthcoming 2023 elections Amb Yohanna Margif ,on Wednesday picked Engr Dung Jack as his running mate ahead of the 2023 general elections.

Margif, who introduced his running mate at the state party secretariat in Jos, said that Jack was selected after wide consultations with party stakeholders, coupled with his wide acceptability.

He said that “After a serious consultation, I am hereby presenting my running mate today, Engr Dung Jack, This took me time after consultation and God directed me to Mathew 20:26 and God asked me to pick him to come and help me jack Plateau state to the promised land.”

In his words “We want to be true servants of the people of Plateau State, we need your support and prayers for God to grant us our heart desires.”

He explained that Jack, a humanitarian who has touched lives positively across the state, assured him that they will work together smoothly in the interest of development in the state.

Margif explained that after going through the track record of Engr Jack, he noticed that he has offered a lot of humanitarian services and he is qualified to govern Plateau in that capacity.

Dung Jack, who hails from Barkin-Ladi Local Government Area accepted to serve the party in the capacity of a running mate and assured that he will bring in his best to move Plateau forward.

“I have served Plateau State in several capacities and because of my heart cry to the people of Plateau state where I was born and brought up, I desire to serve with the whole of my heart in the Labour Party.

He called on citizens of the state to support the labour party in the forthcoming elections.

“Andy Uba was never a legitimate Governor of Anambra State”