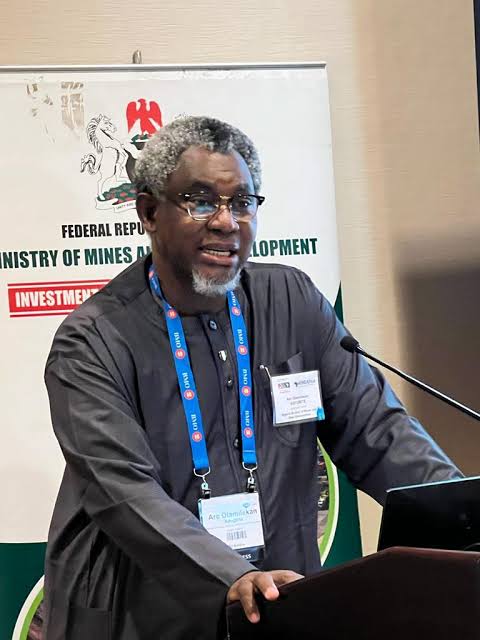 In continued efforts to grow the economy through the mining sector, the Minister of Mines and Steel Development, Arc Olamilekan Adegbite, Thursday, has wooed investors abroad with huge gold, lead-zinc, iron-ore and barite deposits in Nigeria.

Adegbite made the revelations
in his paper titled ‘The Mechanisms of Transparency and Commitment in Mining Governance as Tool for Attracting Foreign Direct Investment to Nigeria’ on the Nigerian Day at the ‘2022 Prospectors & Developers Association of Canada, PDAC, International Convention, Trade Show and Investors Exchange’ in Toronto, Canada.

He also assured them of the Buhari-led administration’s resolve to give the best of incentives never found anywhere in the world to interested and serious investors.

He made it clear that Nigeria’s solid minerals are ranked among the best in quality and quantity as these minerals are rated highest in return on investment, because they are closer to surface and low cost in production.

He added that the Nigerian Government was seriously focusing on the solid minerals sector, which investors and investments bare top on its priority list as as far as policies are concerned which make the mining sector very business friendly because of mechanisms put in place to promote ease of doing business as this is built on strong policy and regulatory structure is very the years.

Meanwhile, according to him, the robust structure, line by line, was the reason Nigeria has been seeking to attract investment into the sector.

However, the Minister acknowledged the the fact that global economies have experienced unprecedented challenges since the break out of COVID-19 pandemic, and as a result the conference is holding in June.

He said: “Nigeria has been part of this event for several years because of our determination to see exponential growth of the mining sector’s contribution to our GDP more than it has done in the past forty years.

“We are here to collaborate and network with global leaders, professionals, investors, Chief Executives of junior, mid-tier and major mining companies. It is also on this premise that the Ministry of Mines and Steel Development, in collaboration with industry stakeholders, vowed to pull resources and consolidate on the 2016 Roadmap for the Growth and Development of the Nigerian Mining Industry.

“In pursuit of the goals set forth in the roadmap, the government initiated an ambitious reform regime in the sector, the flagship of which was the National Integrated Mineral Exploration Programme, NIMEP, designed to rapidly generate bankable geoscientific data with the aim of de-risking the sector and attracting high caliber investments.

“Target minerals under the first phase include Gold, Lead-Zinc, Iron Ore, and the Battery Minerals, among others. The contractors have executed and completed the exploration works on Gold, Platinum Group of Elements, PGEs, Lead-Zinc, Iron Ore and Barites.

“Currently, there is an ongoing review of the Nigerian Minerals and Mining Act 2007, aimed at bringing legislation into conformity with global best practices, limiting the role of government to that of regulation, and creating the space for the private sector to maintain a more expansive presence in the sector.

“The early evidence that our framework is on the right track is the inflow of notable investments.

“These include Thor Exploration Limited’s Segilola Gold Mine Project, in Osun State, which has an initial production capacity of 80,000 ounces of gold annually, representing the first large-scale Gold Mine in Nigeria.In June last year, we commissioned the Dukia Gold & Precious Metals Refinery, DGPMR, Project.

“The company set out to be a foremost indigenous refiner and trader of gold and other precious metals. Its potential impact on the gold sector is nothing short of revolutionary.

“By providing offtake opportunities through the establishment of Precious Metals Buying Centres, it serves as a spur for more small and medium scale mining investment, while its refinery symbolizes its focus on value addition in the gold and precious metals industry in Nigeria and West Africa.

“A similarly remarkable investment is the integrated Iron Ore Mining and Processing Plant set up by African Natural Resources and Mines Limited (ANRML) in Kaduna, which has an initial production capacity of 4.704 million tons of iron per annum and will scale up to 5.88 million tons per annum by 2025.

“In line with the economic diversification plan of the Government, my Ministry has issued a Request for Qualifications for bidders interested in receiving concessions to begin the production of bitumen in Nigeria as the country possesses about 42 billion tons of proven reserves of bitumen, estimated to be the sixth largest in the world.

“These blocks are located close to key ports for export purposes and import of mining equipment, and railways cutting across areas with bitumen deposits.

“Therefore, we seek for suitably qualified investors with pre-requisite experience, technological expertise and financial capacity for the development of bitumen resources in Nigeria.”

Adegbite also made it known that, “Results on Greenfields and Brownfields are on process to be declared for investment opportunities.

“This would provide easy access to geoscience data for prospective investors on potential areas to target for exploration and mining within and outside Nigeria.”

Also, he made it known to that there are a lot of incentives enshrined in the Nigeria Minerals and Mining Act, 2007, which include:Customs and import duties waiver for plant, machinery and equipment imported for mining operations; Tax holidays of between three to five years as applicable;Free transferability of funds and permission to retain and use earned foreign exchange;Capital allowances of up to 95% of qualifying capital expenditure; Deductibility of Environmental Costs (money meant for environmental remediation will be tax free); and100% ownership of mineral properties.

“Similarly, part of our modest efforts towards achieving the desired aim is repositioning the Mining Cadastre Office to promote transparency in mineral title administration.

“The processes have been streamlined to enable investors to apply online and obtain licenses and leases within and outside Nigeria.

“From the revenue drive perspective, the Nigerian Mining Sector has demonstrated a marked improvement despite the challenges of the pandemic. The secret of the sudden jump can be attributed to the introduction of “First Come, First Served” and “Use it or Lose it” in the licensing administration,” he stated.

He further stated that this has helped to re-organize, eliminate speculators, and led to the revocation of about 1,566 mineral titles, activated many dormant licenses and increased revenue inflow into the treasury.