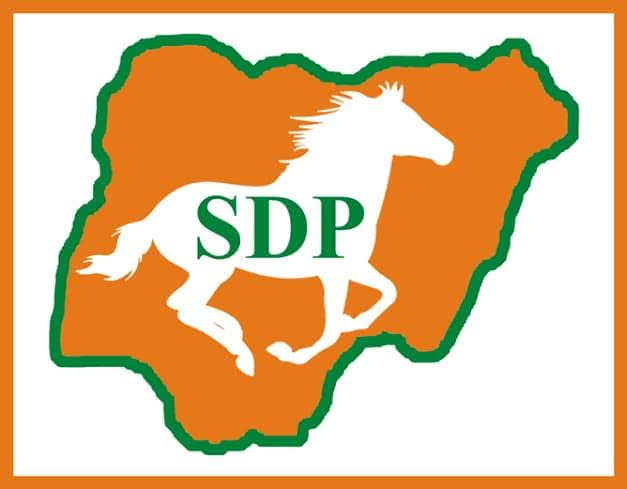 Presidential candidate of the Social Democratic Party, SDP, Prince Adewole Adebayo and other party leaders converged on Thursday in Ado-Ekiti, the Ekiti State capital State capital, Ado-Ekiti urging voters to ensure that the ruling All Progressives Party, APC, and the Peoples Democratic Party, PDP, be defeated at the poll on Saturday.

The SDP Presidential Candidate described the governorship candidate of the party in Ekiti State, Segun Oni as representing a revolution that will change the economic and social facets of the state if reelected.

“If you vote for Oni, he will beautify Ekiti and take Ekiti to the centre of development. Your PVC is your power, use it to get rid of APC and PDP. Your money is not in the Central Bank of Nigeria, but in the pockets of both the APC and PDP. But they have stolen everything. Though, they have not stolen your power to send them packing” .

Adebayo posited that Oni had proved himself as a truthful, honest and competent governor during his reign, saying the All Progressives Congress, APC, and the People’s Democratic Party, PDP, have debased Ekiti through massive looting and should be rejected on Saturday.

He said all manners of government had come after Oni’s government that was terminated in 2010, but described the SDP candidate as different and enigmatic in the delivery of democracy dividends to the people.

Adebayo and other top leaders of the party, including its National Chairman, Alhaji Shehu Musa Gabam,stated this during the SDP mega rally to mobilise support for Oni.

Adebayo said: “We must change this All Progressives Congress, APC, by voting them out in 2022 and 2023 general elections. They have nothing to offer. They are bundle of liars and looters. Nigeria has failed under them.

“By next year, we must have a rethink in this country. With Oni as a governor, pension and salary will be paid as and when due. Oni is a man of character, competence and honesty.

“Don’t vote to cook soup, but vote and become prosperous. In 1993 when MKO Abiola was campaigning for President, where the Old Ondo State stood was where the whole country stood. The SDP had made history as the first party to win a free, fair and credible poll.

The Former Minister of Youth, Solomon Dalung, in his submission, said the Ekiti will pioneer the reclamation of Nigeria.

“APC is very desperate about this election, but their desperation will give us victory. Let us be vigilant , being vigilant means you won’t allow them to steal our votes. Mobilise en masse and stamp out bad government from Ekiti”.

Also speaking, the National Chairman of SDP, Alhaji Shehu Musa Gabam, said it would be a great loss for Ekiti not to vote for Oni in the coming election.

“He is humble and ultimately very competent. He is a man of peace, unity and love. He had served you and you know him to be truthful and honest. I am assuring you that you won’t regret if you decide to reelect him”, he stated.

Addressing the crowd, Oni promised to banish poverty by paying workers’ pension, gratuity, deductions, saying his presence in the race has become a threat to APC.

The former governor added that the APC was so enranged to the point of spewing lies around that he had withdrawn from the race and by preventing many of their leaders from.entering Ekiti to campaign for him.

“You all know that I have the capacity to banish poverty, unemployment, kidnapping by deploying relevant technology and expertise to fight crime and economic deprivation”.