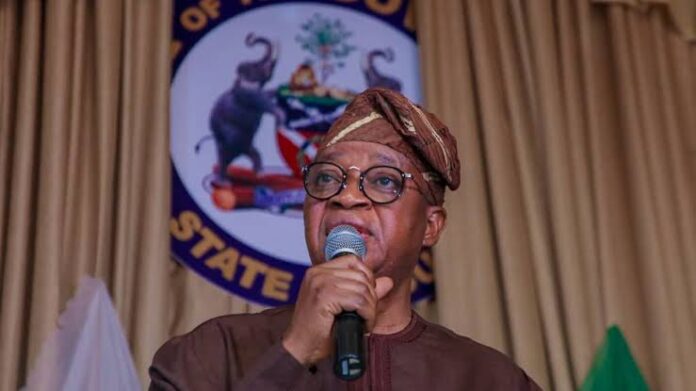 Council workers and the entire public servants in Osun State on Thursday charged to step up advocacy for the return of Governor Adegboyega Oyetola in the forthcoming governorship election which is exactly one month away.

This charge was given by the Chairman, Osun Local Government Service Commission, Elder Tunde Adedeji, while addressing Environment Health Officers from all local government areas of the State who thronged the Commission for the conduct of outstanding promotions, regularization of appointment, conversion and others as approved by the State Governor.

It will be recalled that a circular letter, reference number SMD.61/vol.111/32, dated 18th May, 2022 had earlier emanated from the office of the State Head of Service to this effect.

While shedding light on the ongoing exercise which, he said, started three days ago in the Commission, Elder Adedeji explained that the current exercise is the “mainstream general promotion which will affect all cadres of staff in the State.”

This, according to the LGSC Boss, will be followed by conversion and advancement which, he said, would be continuous.

While expressing gratitude and appreciation to the State helmsman for putting the welfare of workers in the front burner, Elder Adedeji charged the entire members of staff to reach out in propagating the good works of Oyetola which, he assured, will continue unabated in his second term.

In an interview, the President, Environmental Health Officers Association of Nigeria, Osun State Chapter, Sanitarian Ola Olufemi, who described the exercise as laudable and encouraging, pledged support for the current administration in the State, adding that we are all partners in progress.

In a similar development, the South West President, Environmental Health Officers Association of Nigeria, Dr. Temitope Akinwumi, who also partook in the promotion exercise, described it as superb, hitch-free and according to the dictates of the public service, while expressing hope that promotion letters would be dispensed as soon as possible.