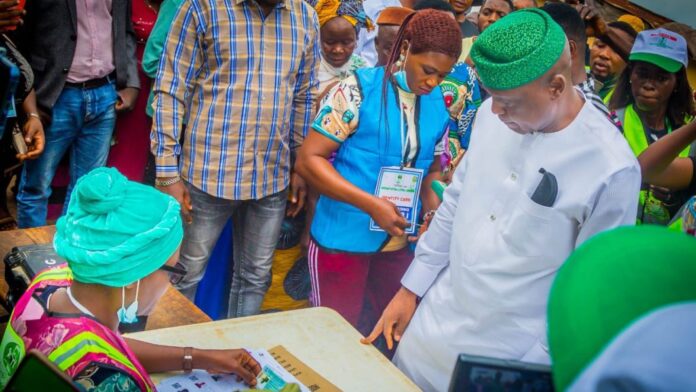 NATIONAL Chairman of the ruling All Progressives Congress, APC, Senato Abdullahi Adamu has described the outcome of the just concluded governorship election in Ekiti state where the candidate of his party emerged victorious as a precursor to expected victories of the party in coming elections.

Adamu, in a congratulatory letter to the Ekiti state governor-elect, Mr. Biodun Oyebanji maintained that the victory recorded at the election was a precursor to expected victories of the APC at the Osun election later this year and at the 2023 general elections, pointing out that the party will continue to be guided by President Buhari’s wisdom in prosecuting all future elections for the consolidation of his legacies.

He attributed the victory to the popularity of Oyebanji’s candidature and the strong campaign strategies put in place by the APC, adding that the governor-elect has the pedigree, experience and vision to take Ekiti state to the next level of development.

Adamu also thanked the people of Ekiti state for reposing their confidence in the APC and Mr. Oyebanji, promising that the new governor will continue to implement the people-oriented programmes of the party as already started by the outgoing governor, Dr. Kayode Fayemi.

“I wish to also thanked members of the Ekiti state APC Campaign Council led by Governor Atiku Bagudu; the State Working Committee of the party, as well as all APC supporters in the State for their hardwork, dedication and vigilance which led to the victory”

He urged the Governor-elect Oyebanji to be magnanimous in victory as he sets out to deliver on the mandate of the people of Ekiti State.