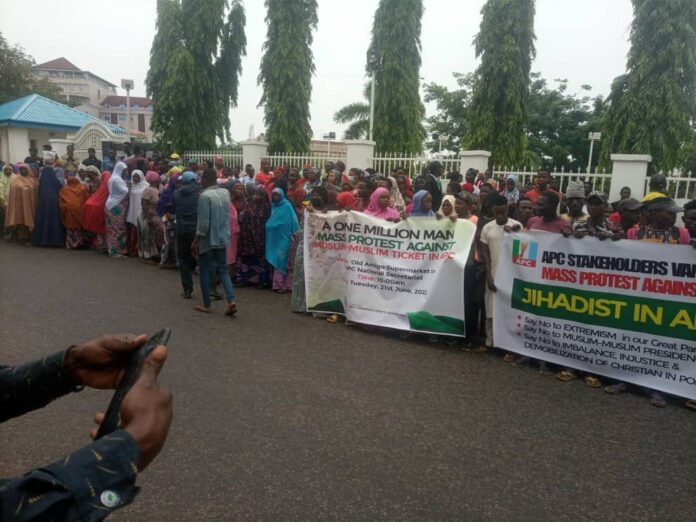 Thousands of All Progressives Congress (APC) members, on Tuesday, stormed the party’s national headquarters to register their disapproval over reports of a Muslim-Muslim presidential ticket.

The party faithful, under the auspices of Concerned APC Stakeholders Vanguard, said their motive is to bring the attention of President Muhammadu Buhari, national chairman Abdullahi Adamu and other leaders of “well-orchestrated plot to put our party at risk of losing the presidential elections”.

In a statement signed by Alhaji Mohammed Abdullahi and Hon. Bako Lucas, the group’s national coordinator and secretary respectively, they noted that a Muslim-Muslim ticket is insensitive, considering “the avalanche of notable Christian members that have sacrificed tremendously for the growth and development of our party”.

According to the group, those calling for a Muslim running mate for Bola Tinubu “must realize that the north-central is a critical constituency

The protest against APC’s proposed Muslim-Muslim Ticket ahead 2023 election
that needs to be harnessed to present a formidable team that would guarantee electoral success at the elections”.

They, therefore, urged President Buhari to intervene “in this contentious issue that could destroy our great party, given the current complexities with our party by not sanctioning a Muslim-Muslim ticket at the critical hour”.

The group added that the “collective interest of our great party should be our guiding principle, given that Nigeria is a plural society with several factors constantly interplaying with one another, including religious, ethnic, and social aspects”.

They, however, vowed not to relent in their quest for a Christian running mate from north-central, noting that “ we are convinced that our position is in the best interest of our party”.