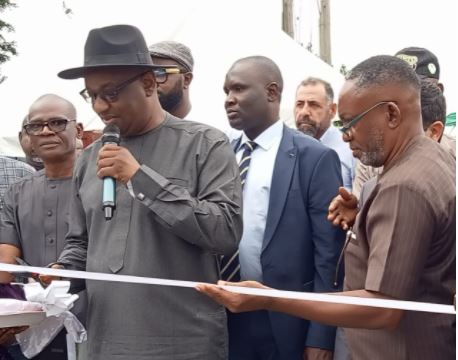 Federal Government has commissioned a number of road projects under its second phase of projects completion across the country tagged “Season of Completion and Delivery of Projects” which include: the Efon -Alaaye -Erinmo –Iwaraja Road linking Ekiti and Osun States as well as Hadejia-Nguru –Gashua road linking Jigawa and Yobe States within the month of June 2022.

This was made known to Journalists in a press release by the Deputy Press and Public Relations, Blessing Lere-Adams, yesterday in Abuja.

The projects are expected to create easy transportation, ease of doing business and reduction in accident rate in the country.

At the commissioning and handing over ceremony of Isoko Ring Road II covering Aviara – Uzere in Oturu -Uzere Community, Isoko South Local Government Area of Delta State , President Muhammadu Buhari who was represented by the Minister of State for Labour and Employment, Barr. Festus Keyamo said, “Our commitment to improving the ease of doing business , create jobs and prosperity to lift people out of poverty brings us here today because the results of our investment are manifesting.”

Buhari remarked, “ I can confidently say that as we enter the final lap of the tenure of the Buhari administration we are also entering a season of completion and delivery of projects.”

The Minister of Works and Housing , Mr. Babatunde Fashola, SAN who was reperesented by the Deputy Director Highways South South Ministry of Works and Housing Engr. Peter Umoren said, “My principal message to you all is that this is the first of the second phase of projects completion and handovers our country will be witnessing as we progress further in this season of completion and impact which started in the last quarter of 2022.”

“In this second phase of completion Mr. President has also approved that Ministers from various states where projects have been completed should represent him to perform the handover formalities. These projects represent major investments in road transport infrastructure , which is a commitment of the Buhari administration as a driver for economic growth and prosperity,” he said.

Earlier, the Permanent Secretary Federal Ministry of Works and Housing, Mr.Bashir Nura Alkali who was represented by the Federal Controller of Works, Delta State, Engr. Jimoh Olawole, said, ‘’ As part of President Muhammadu Buhari’s development agenda of addressing road infrastructural development across the length and breath of Nigeria , the Federal Government as a policy direction focused on the completion of several on-going projects to stimulate economic development, job creation and promoting local content. The focus is to link the major arterial roads to refineries , ports , tertiary instutions and high volume commercial centres with a view to reducing travel times , vehicle maitencance costs , safety and security of commutters etc.”

The Executive Governor of Delta State, Dr. Ifeanyi Okowa who was represented by the Delta State Commissioner for Works, Urban Roads and Highways, Engr. Omodon Noel remarked, ” This event is important because this project underscores the need for strong collaboration between the Federal and State Government in the delivery of development projects. ”

“At the peak of the raining season last year , a bridge on the Oleh – Uzere community, this Ring Road being commissioned today became the saving grace that provided access to the community.”

In his goodwill message, Comrade Ejoor Uweh representative of the President General of Uzere community expressed his gratitude by saying, “Special thank to the President and all the people that contributed in one way or the other to facilitate the construction of the Isoko Ring Road to develop Isoko nation to an enviable height.”

The Area Manager of Levant Construction Nigeria Limited, the contractors of the road project, Mr. Ghassan Fiadel said, “Federal Government has invested so much on roads, bridges and infrastructure across this country . This very road is helping alot in helping people to transfer food , properties within the communities around.”

“The payment is not delayed at all within the period we worked on the road. We thank the Federal Government and hope to get more jobs from the country.”

A former Nigerian Union of Journalists, NUJ, Secretary, Comr. Emmanuel Uzere who is an indegene of the community said, “With this road we now have the presence of Federal Government in our area. Before this project, aggragrian activities in this area suffered alot, and the road has impacted alot on Uzere people for good.”