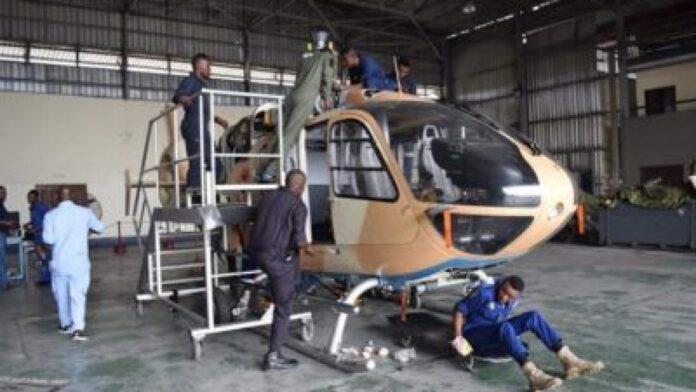 …As President Buhari Directs Launching of Helicopter Before End of Administration in 2023.

The Airforce Institute of Technology AFIT,which is the research and developmentR&Ds, arm of the Nigeria Airforce and the National Agency for Science and Engineering InfrastructureNASENI, under the Presidency have taken up the challenge of completing all works on the first Made-in-Nigeria helicopter initiated by NASENI which President Muhammadu Buhari had directed should be launched before the end of his administration in 2023.

Recently, in order to fast-track works on the Helicopter Project, the President directed the relocation of the Project from NASENI’s site in Abuja to AFIT in kaduna, Kaduna State.

The official handover of space and hangar Helipad, including the runaway for test-flight of the Helicopter located in Airforce Institute took place today in kaduna.

President Buhari is the Chairman of the Governing Board of NASENI.

The President had directed NASENI to complete works on the helicopter project and to make it ready for official launching by him before the expiration of his tenure in 2023.

NASENI in 2017 entered into technical agreement with Dynali Helicopter Company in Belgium for the actualisation of the project before the latest directive by Mr.President that the project should be expanded to include collaboration with AFIT and the subsequent relocation of the project for its continuation at the Airforce institute in Kaduna.

While briefing the commandant of AFIT, the Executive Vice Chairman/Chief Executive of NASENI, Engr. Prof. Mohammed Sani Haruna explained that part of the Presidential directives was that all NASENI projects in Aeronautics should be relocated to AFIT and to be included in the collaborations between the two institutions.

In other words, in the wisdom of Mr President, both military science and knowledge by civilians should be harnessed for the benefits of the larger Nigerian society, going forward.

In his response, the Commandant of AFIT, Air Vice Marshal Mohammed Aminu Yakubu said that the directive from the President “is a task that both NASENI and AFIT must carry out with all the resources that are required to bring the dream to pass”. “We are determined to collaborate to make the dream on the made-in-Nigeria helicopter become a reality”, he said.

President Buhari’s directive also stated that AFIT shall provide space and helipad for the NASENI helicopter and to relocate the project to AFIT so that the two institutions could collaborate.

Air Vice Marshal Yakubu said the collaboration between NASENI & AFIT was the clincher collaboration to launch Nigeria into relevance in the world of aviation with the proposed involvement in aircraft design and development.

The high capacity and manpower in this area have made the AFIT acquired experts about ten (10) Ph.Ds in aeronautics, he disclosed.

The Airforce is at the verge of developing of unmanned aerial vehicles. AFIT has gone very far in the design and manufacturing of air vehicles, he said, stating further that the collaboration to produce the First made in Nigeria helicopter between the two organisations was sacrosanct and therefore would be pursued with vigour in the days and months ahead.

According to the terms of the collaboration, some NASENI technical staff will be resident in AFIT for adequate interface for the purpose of sharing knowledge and technical capacity.

The handing over ceremony took place and the following items were handed over to the Executive Vice Chairman of NASENI: the hangar, office space and run-way, where on completion of the aircraft, the Made in Nigeria helicopter will embark on test-flight.

The Executive Vice Chairman of NASENI who was highly elated by the development explained that the journey to seeing the NASENI first-made-in Nigeria helicopter is coming gradually to fruition.

Speaking to journalists, Prof Haruna said the journey to produce the First made in Nigeria helicopter began in 2017 and therefore now gradually coming towards its desired target.