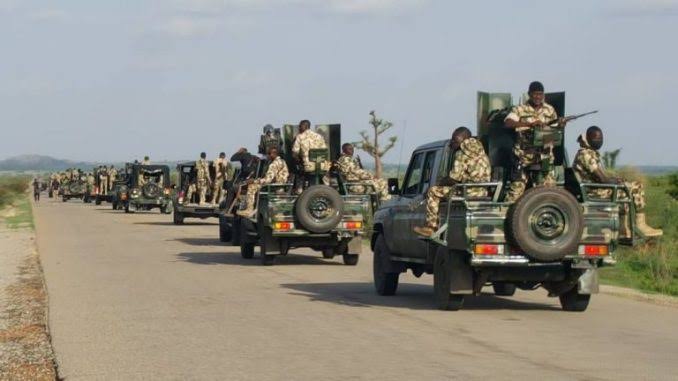 Defence Headquarters says troops and other security agencies have recorded significant successes against criminals across theatres in the last few days.

The Director, Defence Media Operations, Maj.-Gen. Bernard Onyeuko, said this in a statement on Thursday in Abuja.

Onyeuko said the troops of Operation Hadarin Daji had on June 21 engaged terrorists at Rafin Dankura in Bakura Local Government Area of Zamfara who abducted some innocent civilians.

He said the encounter led to the rescue of six kidnapped civilians and killing of two bandits in the process.

The defence spokesman said that troops also killed two terrorists at Maigora in Faskari Local Government Area of Katsina State on the same day and recovered cache of weapons.

He also disclosed that troops of Operation Whirl Stroke on June 20 arrested a notorious gun runner, one Ardo Maranewo, who had been on the wanted list of security agencies.

According to him, the suspect is a specialist in selling and leasing arms and ammunition to bandits and kidnappers in Taraba.

“Also on June 21, troops raided a kidnappers’ enclave at Maraba in Ukyonugu Ityuluv Ward in Ukum Local Government Area of Benue and arrested one Ichen Igbaka (65), a bandits’ collaborator and his wife Mrs Salomi Gbaka.

“Their house was used by a late bandit leader, Mr Azu, as a hideout.