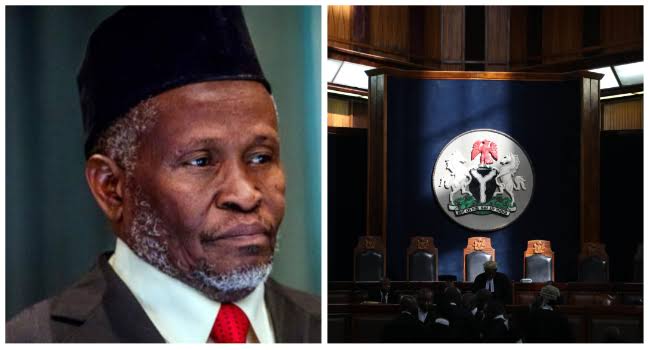 *Muhammad maintains that he resigned on health ground

To forestall a total breakdown in the dispensation of justice at the Apex court, especially with the threat of 14 Supreme Court Justices to boycott court sittings from September this year, if former Chief Justice of Nigeria, Justice Tanko Muhammad fails to step down, forced the erstwhile number one judicial officer to resign yesterday.

Justice Tanko Muhammad resigned his office yesterday, citing ill-health. He was to formally retire from service on the last day of this year, having clocked the mandatory age of 70.

Sequel to the petition by the 14 justices of the Apex court, which was copied, The Presidency, it was learnt, threatened to embark on strike until the issues they raised in the petition were addressed.

The Body of Benchers had set up a 7-member committee to resolve the face-off between the former CJN and the 14 Supreme Court justices.

Justice Muhammad’s resignation is coming on the heels of poor welfare of justices of the federation, who had on June 14; this year sent a formal protest letter to him and copied the presidency.

Nigerian Pilot gathered that the aggrieved judicial officers were disgruntled because the supreme court of Nigeria under the leadership of Justice Muhammed has worsened their situation by denying them the welfare package they are entitled to, even as the said package was captured by the court’s budgetary allocation.

They claimed that the relevant government agencies saddled with the responsibility of reviewing their salaries and allowances have kept them on the same salary scale for 14 years.

The justices had accused the former CJN of ignoring their repeated demand for improved welfare, despite the upward review of the budgetary allocation of the Judiciary.

In keeping with the judiciary tradition of seniority in the bench, President Muhammadu Buhari yesterday swore in Justice Olukayode Ariwoola as the Acting Chief Justice of Nigeria (CJN).

The swearing-in took place at the Council Chamber of the Presidential Villa, Abuja.

As is customary, President Buhari administered the oath of office to Justice Ariwoola.

Before his elevation to the Apex court, Justice Ariwoola was Justice of the Court of Appeal between 2005 and 2011 after having been elevated from the State High Court of Oyo state.

He at various times served as Justice of the Court of Appeal in Kaduna, Enugu and Lagos Divisions.

Meanwhile, the Acting CJN, Justice Ariwoola, debunked rumours of crises in the Apex court, but noted that the issues of welfare of its members were being addressed.

But speaking to the State House press corps on what he would do differently, the Acting CJN assured that he would preserve, abide and protect the constitution of the Federal Republic of Nigeria.

“And so be it. That is what I will do especially with the cooperation of my brother Justices of the Supreme Court. We shall not fail Nigeria”, he said.

Meanwhile, President Buhari has said that he received the resignation of Justice Muhammad with mixed feeling, stressing that he wished he was able to fully serve his term.

His words, ‘Earlier today, I received a letter from the Honourable Justice I. Tanko Muhammad, CFR, resigning as the Chief Justice of Nigeria and Chairman of the National Judicial Council, on health grounds. The resignation is to take immediate effect.

‘I am therefore constrained to accept his retirement, albeit with mixed feelings.

“Nigeria’s judiciary under the leadership of CJN Tanko Muhammad judiciously exercised the judicial powers of the Federation. His era witnessed several landmark, jurisprudential and policy decisions by the Supreme Court, and by extension other Courts established by the Constitution.

”CJN Tanko dealt firmly with the issue of reckless and indiscriminate grant of ex-parte Orders that was assuming serious dimensions”, he said.

President Buhari later decorated the former CJN with the second highest national honour of the Grand Commander of the Order of the Niger (GCON).