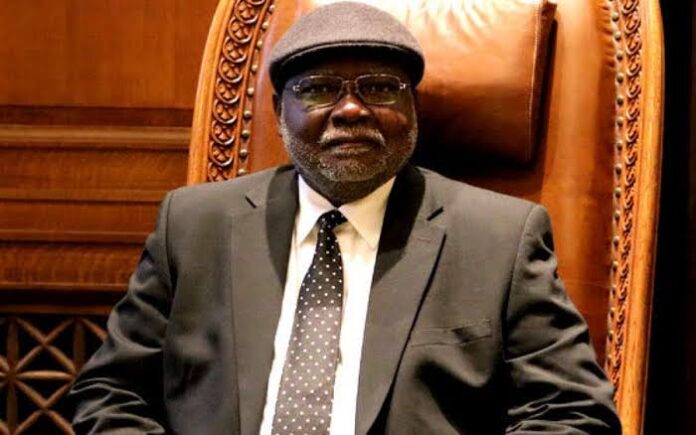 *His date of birth at the Supreme Court website deleted

*Supreme Court spokesman says the Ag CJN was born in 1954

*NJC may summon emergency meeting over the issue

Barely 24 hours after his swearing-in as the number one judicial officer of the Federation and acting Chief Justice of Nigeria, Justice Olukayode Ariwoola, is enmeshed in an age falsification scandal.

Following the sudden resignation of the erstwhile Chief Justice of Nigeria (CJN), Ibrahim Tanko Muhammad on health ground, President Muhammadu Buhari had on Monday at the Council chamber of the Aso Rock Villa administered the oath of office on Justice Ariwoola as the most senior member of the Bench.

Justice Ariwoola is expected to serve in acting capacity until confirmation by the National Judicial Council (NJC) and the National Assembly.

The Ag CJN according to his biodata posted at the Supreme Court website, Wikipaedia, Google indicate that he was born on August 22, 1958.

Strange enough, his biodata also said that he started primary school education in1959 barely one year after his birth.

However, when an online medium, The Cable broke the news earlier yesterday, the date of birth of the Ag CJN was deleted at the website of the Supreme Court and replaced with ‘he was born over 60 years ago’.

The spokesperson of the Apex Court, Festus Akande reportedly told The Cable that the acting CJN was born in 1954.

His words: “There’s no disparity and I don’t know where those people got that information from.”

A highly placed judiciary source yesterday told the Nigerian Pilot newspaper that age falsification is a very serious offence most especially in the judiciary circle and can’t be tolerated.

According to the source, several judicial officers have lost their jobs, including heads of court as a result of age falsification related offences.

The source further added that the National Judicial Council, NJC may call for an emergency meeting over the controversial issue.

At the swearing-in ceremony in the Presidential Villa, the acting CJN swore to be faithful and bear true allegiance to the federal government, as well as defend the Constitution of the Federal Republic of Nigeria.

Justice Ariwoola was born in Iseyin, Oyo state, on August 22, 1958. According to his credentials, he began his primary education less than a year later in 1959 at the Local Authority Demonstration School, Oluwole, in his hometown. He would spend eight years in school before graduating in 1967.

He then moved to Muslim Modern School in the same town from 1968 to 1969 before graduating to Ansar-Ud-Deen high school, Saki area of Oyo, for secondary education.

He earned his law degree from the University of Ife (now Obafemi Awolowo University) in 1980, and a year later he was called to the Nigerian bar and got enrolled as a solicitor and advocate of the Supreme Court.

Before Justice Ariwoola was sworn into his new role, insiders within the Apex court told our correspondent that some Justices of Northern origin were against his appointment on the grounds that the 63-year-old is allegedly battling health issues.

They alleged that the illness might affect Justice Ariwoola’s performance as the leader of the Supreme Court just as it did the immediate past CJN Justice Tanko Muhammad.