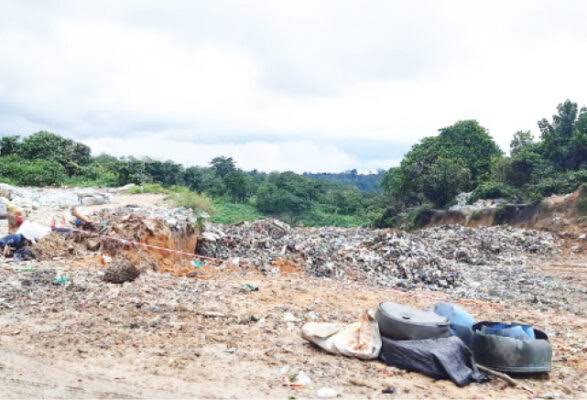 Akwa Ibom State government has given a 48 hours marching order to relevant authorities to ensure the evacuation of refuse on the state dump site, situated along Uyo village Road, for free flow of vehicular and human traffic.

Secretary to State Government, Dr Emmanuel Ekuwem gave the order on Monday when he undertook an inspection of the dump site along with all relevant Government officials in the state Environment sector.

Ekuwem said, as part of remedial measures toward clearing up the menace of the dump site, an asphalt inroad would be created to enable trucks drive about 50 meters from the road into the ravine where the refuse will be dumped to stop the negative effect of roadside dumping of refuse.

The SSG directed the Commissioner for Works, Dr. Eno Ibanga to work out the engineering content of the remedial work within 48 hours in collaboration with the Chairman of the Akwa Ibom State Environmental Protection and Waste Management Agency, Prince Akpan Ikim.

While acknowledging the quantum of Waste at the dump site which could be converted into needed energy and power for consumption, he also directed the Commissioner for Power, Dr. John Etim to reactivate plans for the recycling of the waste into a veritable source of energy for the state.

Ikim had earlier said it was expedient for the government to undertake the tour to appraise the menace of the dump site and seek both short and long-term measures towards amelioration of the menace.

He reiterated that, with the cosmopolitan nature of Uyo city, over 18,000 tons of Waste is generated per day for dumping at the Uyo Village Road dump site, stating that, there was urgent need for a larger new sanitary dump site outside the state capital.

The Chairman who said, a State Environmental Protection Bill has already passed first and second hearing at the State Assembly, called on public spirited individuals to partner the agency in the task of waste management and waste recycling.