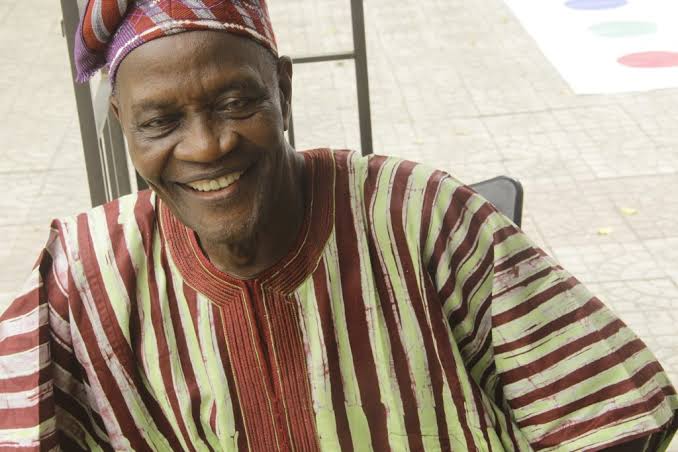 Recognized by many over generations, thanks to his unique style of reciting folktales with his booming golden voice backed up with guitars, singing in different tones, using passionate gesticulations and mimicry to drive the message home to his young and not so young listeners.

Recognized by many over generations, thanks to his unique style of reciting folktales with his booming golden voice backed up with guitars, singing in different tones, using passionate gesticulations and mimicry to drive the message home to his young and not so young listeners.

Jimi Solanke was born on 4 July 1942 in Lagos but he hails from Ipara Remo. He attended Odogbolu Grammar School and he was one of the first set of graduands of The School of Drama by the Institute of African Studies, the first in Africa at the University of Ibadan. It later became the Department of Theatre Arts. Solanke joined the Department of Dramatic Arts, the University of Ife (now Obafemi Awolowo University OAU) in 1969. He is an Associate fellow of the Institute of Cultural Studies.

After graduation, Solanke moved to the United States, where he created a drama group called The Africa Review, focusing on African culture. Members of this group usually put on African clothing, specifically Yoruba costumes, they performed in black African schools. Solanke established himself in Los Angeles and California where his storytelling career began. He was described as a “master storyteller” by CNN.

In 1986, he returned to Nigeria with three members of the African Review group to work with the Nigerian Television Authority.

His reputation earned him the lead role in most of Ola Balogun’s films, he was part of the team that made the film Kongi’s Harvest by Nobel Laureate Wole Soyinka.

He played lead roles in Death and the King’s Horseman, Kurunmi, Chattering and the Song, Kongi’s Harvest, Ovoramwen Nogbaisi, The Divorce, and many more. He starred in several shows on Nigerian Television (NTA) starting from the 1960s to date, including The Bar Beach Show, For Better for Worse, Village Headmaster, Family Scene on Lagos Television (LTV), Children’s Half Hour, Storyland, African Stories on (AIT), Sango – The movie and many others.

Solanke composed Onile Gogoro, Eje ka jo, Jenrokan, Na today you come and he was the lead voice in Ralph MacDonald’s “The Path” recorded in New York 1977 and a consultant for Theatre for Development, UNICEF, UNFPA, Women and Children’s Health.

He is legally married to Margaret and has 10 children from her and other women.