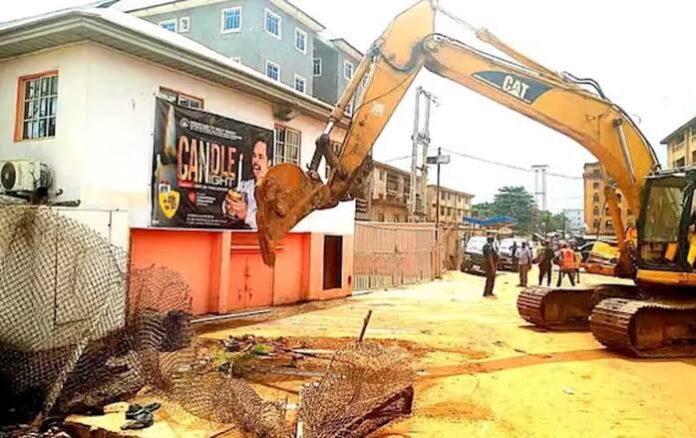 Controversial Onitsha-based pastor, Chukwuemeka Odumeje was yesterday manhandled by security agents in Onitsha as his church was demolished.

The pastor who is popularly known as Indaboski Bahose, and Liquid Metal was manhandled by security operatives as he was coming to his church, Grace And Power Prophetic Ministry in Onitsha.

It would be recalled that Odumeje’s church had in March this year been identified by the Anambra State government as one of the buildings sitting on drainage channels and marked for demolition.

Anambra State governor, Prof Chukwuma Soludo had visited Okpoko, a sprawling slum in Onitsha, a day after his swearing in and pledged to sanitize the area by ensuring the drainages are free.

During yesterday’s demolition exercise, eye witnesses said Odumeje had attempted to stop the officials of the state government from demolishing his church, when he was manhandled by security men who accompanied the demolition team.

A video trending online showed the cleric being shoved around by security men including police officers and men of the vigilante services.

He was slapped severally and restricted from moving to the demolition area by armed security men.

The video however sparked mixed reaction with many condemning the treatment of the cleric, saying it was unfair to manhandle him.

The Chief Press Secretary to Anambra State governor, Mr Christian Aburime who confirmed the demolition said it has no sinister motive.

He said that the state government had given notice to all those that their buildings were situated on drainage for two months.

According to him, people became interested because the building is a church.

He said “Following the expiration of the more than two weeks notice beginning from April 2022 served on developers and building owners who built several illegal structures along the waterway in Fegge and environs within Onitsha, Anambra state government has begun demolition of such structures.”