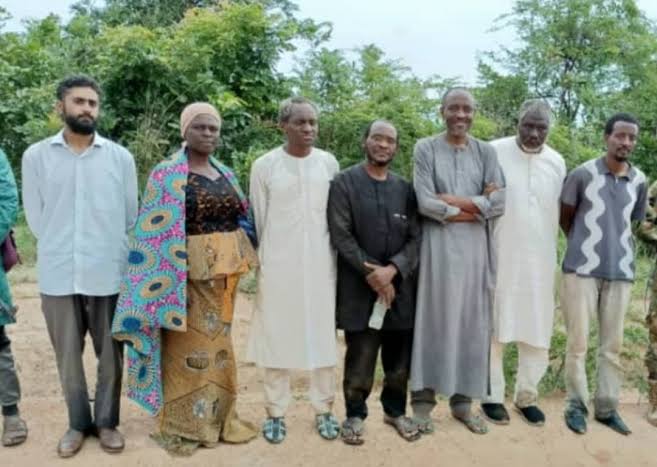 The abductors of the Abuja-Kaduna train passengers have reportedly released seven more victims from their custody including Sadiq Ango Abdullahi, son of the Chairman of the Northern Elders Forum and former Vice Chancellor of the Ahmadu Bello University, Prof Ango Abdullahi.

This is coming after more than 100 days that they were abducted by the terrorists.

According to reports, the release of the kidnapped passengers was disclosed by Malam Tukur Mamu, one of the negotiators and Media Consultant to bandits’ advocate and Islamic cleric, Sheikh Ahmad Gumi.

Mamu while announcing the release of the seven victims on Saturday said that their freedom came through efforts and negotiations with the terrorists.

Speaking on the release of the victims, Mamu said, “I want to assure the nation that everything that was achieved today was singlehandedly initiated and arranged by me with the full support and prayers of my principal, Sheikh Gumi.

“That is why I keep emphasising that the government has the power to end the agony of these innocent victims in one day. This is just one individual that sacrificed his life and even integrity. There is no military solution to the current security debacle in Nigeria.

“When you sincerely engage these guys, even though wicked with misguided religious beliefs, they are listening. I have sufficient evidence to prove that they do listen. It is this power of engagement and sincerity that resulted in the release of these seven victims.

“In whatever I do, I don’t need or require any reward from anybody but from Allah and I hope the nation we sacrificed our lives for will recognise us.”

Mamu said that the released victims had been handed over to the military and were currently on their way to Kaduna.
He further explained that “The location they (abductors) gave is remote, sensitive and risky. There was a military checkpoint before penetrating the forest. My team was stopped by the soldiers but when they told the military our mission they contacted the GCO and he immediately gave approval for them to proceed.

“And after the victims were successfully evacuated, travelling through over 40 kilometers in the forest, they were given a military escort back to Kaduna at the checkpoint.”

Recall that terrorists attacked an Abuja-Kaduna train on March 28, killed at least eight persons and kidnapped over 60 others.

The terrorists had demanded that the Nigerian government release their children in Adamawa State Correctional Centre or they would kill all the abducted passengers in their custody.