Udom Emmanuel: A promise keeper at 56 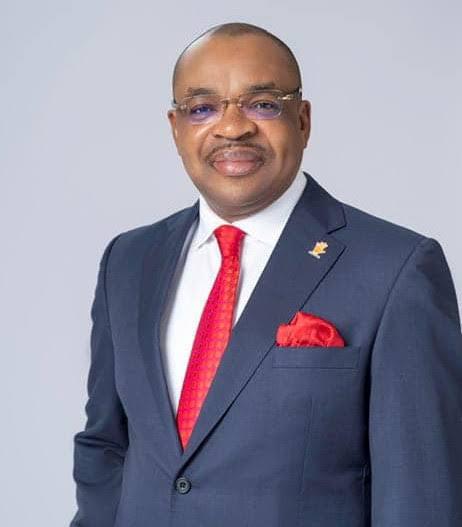 It was the famous Greek philosopher, Aristotle, who during one of his most adventurous postulations had described hope as a “waking dream” implying that hope is another act of the irreducible power of human imagination that, though abstract, carries within it the power of faith and reality. What is apparent with Aristotle’s analogy was the evidence that, as a construct and a concept, HOPE has its foundation built on the assurances of a PROMISE that will be kept and faith that will come to fruition. These two words – Hope and Promise are the crucial resources of great leaders throughout history, from Gandhi to Mandela, and from Winston Churchill to Alexander Hamilton, all these great men were known for inspiring hope and keeping their promises to lead and to shine their light for others to find their own part.

In the context of what represents a promise, it is understood as an expression of a commitment and declaration of assurance. The word ‘promise’ translates to honor, pledge, vow, guarantee, oath, and bond. Promise provides a framework for an individual to offer a commitment and accountability and for the beneficiary of a promise, the factor of hope serves as the foundation upon which they anchor their trust, believing that the promise made will be fulfilled. For promises to be fulfilled, the maker of such promises must be a promise keeper; one who is committed to doing all he said he will do. His Excellency, Governor Emmanuel Udom, the amiable and progressive governor of Akwa Ibom state is a personification of promises kept to the people of Akwa Ibom State. He has fulfilled promises he made to Akwa Ibomites since his assumption of office on May 29, 2015.

It was on a glorious Monday, in the month of July and the date 11th in the year 1966 that the family of Mr. Gabriel Emmanuel Nkenang, a native of Awa Iman in Onna Local Government, welcomed into their home Gabriel Emmanuel Udom, who is to later become the 4th democratically elected Governor of Akwa Ibom State. Governor Udom Emmanuel started out early in life and attended Secondary Commercial School for his secondary school education, then proceeded to the School of Arts and Science, Uyo, where he received his Advanced Certificate of Basic Studies (CBS) and a Higher School Certificate (HSC). From there, he went on to study Accounting at the University of Lagos where he graduated with a Second Class Upper Honours.  In his twenties, he worked as an Audit Manager in Price Water House Coopers and then moved on to work with Diamond Bank Plc (now Access Bank Plc). From there, he moved on to Zenith Bank Plc in 1996, and worked there for 17 years, occupying posts of pioneer manager of Zenith Bank Lagos Central Branch, Non-Executive Director, and then Executive Director. Upon leaving Zenith Bank, he was appointed by Mr Godswill Akpabio (former Governor of Akwa Ibom) as Secretary to the State Government. This was in 2013.

In 2014, Governor Udom Emmanuel contested for the office of Governor on the platform of the Peoples’ Democratic Party (PDP). He won in a landslide victory with a total of 999,071 votes, beating his closest opponent, Umana Okon Umana who only scored 89,865 votes. He repeated the same feat in 2019 when he polled a total number of 519,712 votes to defeat his opponent in the All Progressives Congress, Obong Nsima Ekere, who scored 171,978 votes.Governor Udom’s first tenure was anchored on a 5-point agenda: Wealth Creation, Economic and Political Inclusion, Poverty Alleviation, Infrastructural Consolidation and Expansion, and Job Creation, while his second tenure which ends on May 29, 2023, is anchored on an 8-point (completion) agenda: Industrialization, Aviation Development, Rural and Riverine Area Development, Agricultural, Human Capacity Development, Security, Infrastructure, Small and Medium Scale Enterprises.

In his 2nd term Inaugural Speech on May 29, 2019, Governor Udom stated as follows “We will aggressively industrialize this State and continue to attract foreign favorable ensuring that the environment is made favourable for investments. We hope to make Akwa Ibom the industrial hub of Nigeria.” He has kept to his words. In terms of industrialization, some of the projects of the administration include the completion of the Jubilee Syringe Manufacturing Factory, in Onna Local Government, which is the largest in Africa. The company which is located in Awa was established in 2017, for the purpose of producing disposable syringes of different sizes, 2mL, 5mL, and 10mL. It should be noted that the syringes are made from the best quality raw materials. Little wonder that the company bagged the International Organization for Standardization (ISO) certification for quality, having conformed with the requirements of ISO 9001:2015 and ISO 13485:2016, International Standards. Located also in Awa, Onna Local Government Area is the wholly-owned indigenous company, Metering Solutions Manufacturing Services Limited, whose goal is to meet the metering needs of Nigeria. Working one shift, the company currently has the capacity to produce 1,200,000 electricity metres annually. Its capacity will increase to 3,600,000 electricity metres annually if the production shift is increased to two. Other industrial projects include the completion of the Pencil Factory in Itu; the completion of the Cassava processing mills in both Ikot Okudom, Eket and Ibesikpo Asutan; the completion of the toothpick and plastic factory both located in Itu; the resuscitation of Ibom Paints Limited in Etinan; the completion of the Ufaini Palm Kernel Crushing Plant, Ukanafun as well as the Flour Mill in Onna.

In terms of agriculture, the state has made great strides under Governor Udom’s leadership. The Governor understands the prospects of agriculture which include being a source of foreign exchange for the state, reduction in rural-urban migration, and increased job opportunities. It is against this background that the administration is committed to the development of the agricultural sector. Some of the contributions of the administration to the advancement of agriculture include the distribution of 2 million improved cocoa seedlings to farmers, the training of 450 youths on the maintenance of cocoa, the massive cultivation of rice in Ini and Ibiono Ibom local governments, the establishment of agricultural equipment hiring enterprise centre, acquisition of tractors with accessories. Other laudable projects include onion cultivation and the establishment of a hybrid rubber nursery both in Okobo local government, the distribution of 54, 538,100 kilograms of maize seedlings to farmers, the installation of maize preservation/shelling machine at Nung Udoe, the training of 360 youths in Israel on various agricultural enterprises, the establishment of fish processing factories in Mbo and Ibeno local governments as well as the provision of a 10 metric ton cocoa fermentation and drying plant located in Ini local government.

The rural and riverine communities have not been left out of the administration’s impact. The Udom Emmanuel-led administration has succeeded in attracting industries to these communities. In the local governments, over 500 development projects have been executed, including the construction of feeder roads, provision of water, as well as completion of electrification projects. Furthermore, the administration has executed over 2,000 inter-ministerial direct labour projects, which include the construction of classroom blocks and primary health facilities, skill acquisition centres and market stalls, among others. Governor has also made great in the SME sector, aviation sector, and sports sector, among others, too numerous to be listed in this article.

In his 56 years of existence, the promise keeper, Governor Udom, has spent one-eighth of his file touching the lives of Akwa Ibomites and deserves commendation for this, building hopes and keeping promises. The Governor who doubles as a Deacon in United Evangelical Church is married to Her Excellency, Mrs Martha Udom Emmanuel, (whose pet Project is Family Empowerment and Youth Reorientation Programme (FEYREP)). Some of the objectives of the initiative include empowering women to provide economic and emotional support to their families, advocacy for the prevention of teenage pregnancies, education for the girl child, promotion of moral values and economic excellence, as well as providing support to government efforts towards sustainable development. The union of Mr and Mrs Udom is blessed with four children.

Here is wishing the governor a hearty and rewarding happy birthday!