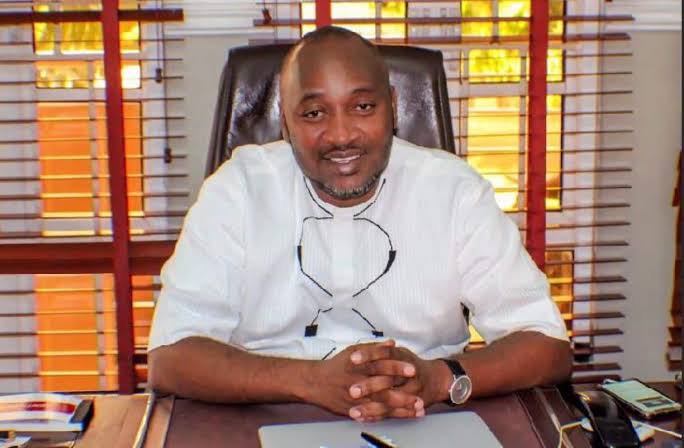 Presidential Candidate of the African Democratic Congress, ADC, Dumebi Kachikwu, has called on Nigerians to take charge and secure the country by ridding it of corrupt politicians who have obviously failed in their duties.

Bringing the present administration under serious lash, Dumebi noted that the most painful part of the nation’s collective suffering is that “we are too afraid to say anything” adding that the media operate in fear of having their licences suspended or revoked, the opposition parties dread
that invitation from the security agencies when they speak out of turn.

“If they have been there, then they have done that. Get rid of them.

“The 5th of July 2022 was a watershed moment in our nation’s history. Not only was our President’s advance team
attacked and some killed but a medium security prison in our capital city was attacked by Islamic State West Africa
Province, ISWAP, a breakaway faction of Boko Haram.”

He stated that according to government officials, 879 detainees had escaped and among them 68
Boko Haram members some of whom had been involved in previous bombing campaigns.

“What were known terrorists
doing in a medium security jail? This is one of the questions begging for answers as the Nigerian people reel from one
attack after the other. This was the fourth prison break in the
last year and a week before this about 40 security personnel were killed in a mining site while providing security to Chinese
miners. 40 worshippers were killed in a church in Owo and 90 killed in Zamfara State all in the last one month. A few months ago, a train was attacked in
Kaduna, scores killed, and hundreds kidnapped,” the ADC presidential candidate noted.

He said that under the Buhari administration, Nigeria has witnessed unprecedented calamity second only to the Nigeria civil war. From Taraba, Kogi, Niger, Abuja, Katsina,
Zamfara, Borno, Sokoto, Kaduna, Ondo, Imo, Anambra, tales of woe stressing that the streets of Nigeria now flows with the blood of the innocent.

“Many a mother is weeping. Many a wife in sorrow. Many families left to mourn
quietly and helplessly. In all this no one has lost his or her job. No minister, national security adviser or President has
resigned. The shame of a nation. Who did this to us? We reduce the dead to nomenclature such as scores killed, dozens killed, hundreds killed. Don’t we know they have names? They had dreams, ambitions, aspirations.
They had loved ones. What needs to happen before we know Nigeria is a failed
state? Who needs to die again? Which school needs to be attacked? Who needs
to be kidnapped before we realise that this administration has nothing more to offer? Beyond the killings and
kidnappings, we also have to contend with a failed economy.

“Tens of millions unemployed and underemployed. Yahoo and the trade in human parts are now accepted as industries in our nation. The naira is 612
to the dollar today. Our farms are untended as terrorists rape, maim and kill our farmers while our government looks the other way.

“Five months of fuel scarcity in some cities like Abuja, diesel at an all time high of N800 a litre and the middle class who are
the engine room of every society just wiped out overnight. Our children are at
home as government and ASUU fritter away their future. I can spend the next 24 hours talking about the failures of this government, but they are all too familiar to us all.

“We also know that this president will never resign and that he will never be impeached by this weak assembly. So, what are our options as a people? Do we let ourselves be killed? Do we wait for the next rain of bombs on our cities? Do we
wait for the next calamity?

He further urged Nigerians saying “today we must reset. Today we must chart a new course. Today we must choose to fight for Nigeria. Today we must fight for ourselves. Let us look within us and find the courage to start again. We must take our country back from these evil men. We must resist all invaders. We must defend our lands, our cities, our country, block by block. This is our patriotic duty. No longer will we let religion, tribe and tongue divide us. Those who have destroyed our country are from
all tribes, tongues and religions so we must not be deceived.

“They are in the minority. We are in the majority. We have suffered and endured for too long and we must endure for a little while longer.

“You must endure. We must endure. Architects and town planners form groups in your communities. Create the
masterplan of the community you envision for your city. Engineers come together in your different cities and design the infrastructure we need.”

He also called on Nigerians to join the rescue mission emphasizing that “let’s start
changing Nigeria one person at a time, one street at a time, one city at a time and one state at a time. We will rescue Nigeria. It is our goal, it is our destiny, it
is our mission. Remember, the rescue starts with you. We must take a stand for Nigeria today. It is the right thing to do.”

He again charged the media to take a right stand saying “As I prepared to make this speech today, certain media organisations declined to cover me. They were worried that I would say something
about the government that would affect them. There is no society in the world that
can survive with a cowed and cowardly media. None. When the parliament fails, when the executive fails, when the
judiciary fails, when society fails, the media must never fail.
For if they were to fail then all hope is lost. The media must arise and shine at a
time like this. Your country needs you.”