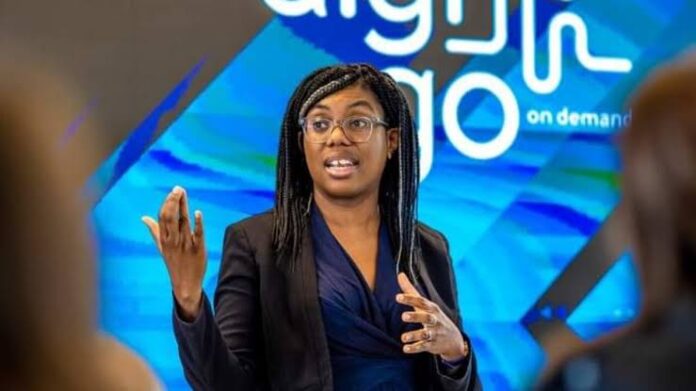 Badenoch is 42 years old and resigned as equalities minister recently in the gale of cabinet ministers’ resignations that forced a reluctant Johnson to quit as the leader of the Conservative Party in the UK last Thursday.

She is one of the four female lawmakers in the race. Others are Junior Trade Secretary Penny Mordaunt; Foreign Secretary Liz Truss and Attorney General Suella Braverman.

Badenoch, the member of parliament for Saffron Walden, announced her bid for the British top job in an article published by the Times of London newspaper last Saturday, expressing the wish to run a “strong but limited government focused on the essentials.”

“I’m putting myself forward in this leadership election because I want to tell the truth. It’s the truth that will set us free,” she wrote.

The former equalities minister also promised to run on a “smart and nimble centre-right vision.”

She also hit out at “identity politics” and said Boris Johnson was “a symptom of the problems we face, not the cause of them.

“People are exhausted by platitudes and empty rhetoric. Loving our country, our people or our party is not enough,” she said.

According to Wikipedia, “Badenoch was born in 1980 in Wimbledon, London, to Femi and Feyi Adegoke. Her father was a GP, medical doctor and her mother is a Professor of Physiology. Badenoch’s childhood included time living in the United States, where her mother lectured and Lagos, Nigeria. Whilst in Nigeria she attended the International School University of Lagos and describes herself as a middle-class Yoruba school girl.