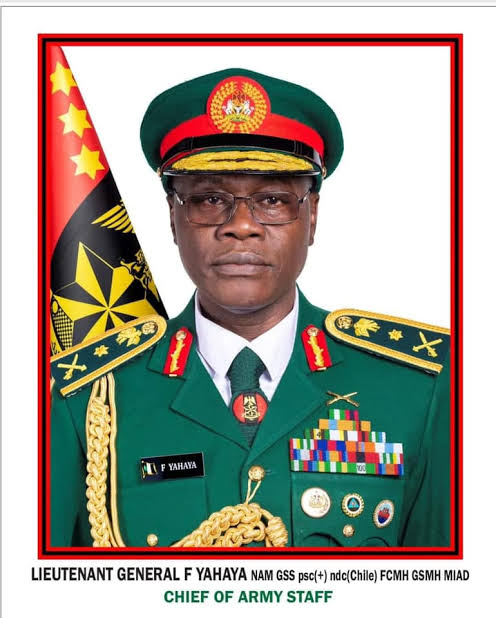 PRESS STATEMENT: Since the proactive and patriotic Chief of Army Staff, Lt. Gen Faruk Yahaya took over the mantle of leadership, the Nigerian Army has greatly reduced the ferocity of the Boko Haram insurgents/ISWAP; curtailed farmers/herdsmen clashes across the country and also nipped in the bud, various unpatriotic elements who are fanning the embers of war within the country.

Nigerians have never been so proud of the professional focus of the army as regards the safeguarding of the territorial integrity of the nation and the high motivation espirit-de-corps of officers and men, including conforming to the best global practices as it relates to human rights and civility of the Nigerian Army in this democratic dispensation.

Every well-meaning Nigerian is supposed to know that the globe is undergoing a revolution in Technology, Communication and Information flow: in business practices and organizational structure; in ways nations relate to one another and respond to their publics, in the ability of how regional and international organizations respond to conflicts, humanitarian and natural disasters. The new world environment demands new ways of doing things as much as how to command a unit and take the next hill or piece of land of the enemy’s territory.

The attention of Africa Advocacy for Leadership and Good Governance (AALG) as well as that of Transparency Network Centre (TNC) (two pro-human rights and pro-democracy groups) has been drawn to the recent numerous media publications and headlines skewed and slanted to favour the insurgents against the Nigerian Army for some time now. This is indeed the handiwork of mischief makers and fifth columnists, a propaganda troll orchestrated by enemies of our unity, peace and stability of the country, to give the impression that the insurgency is winning the battle and to throw fears to Nigerians that we are at the losing end.

We view this as a deliberate falsehood and misleading narrative invidiously orchestrated and calculated to tarnish the unblemished professional reputation of our distinguished military who have spent the better part of their life protecting and defending this country from external aggression and securing its territory.

Ordinarily, we could have kept quiet as some of these subterranean moves are aimed at denigrating and maligning our national pride; the Nigerian Army has done their best for their hard-fought battles which these disgruntled elements now want to turn it into oblivion by falsely casting sensational headlines in favour of the insurgents and divisive elements across the country. We are constrained to issue the following statements:

The recent attacks of Boko Haram insurgents, bandits, kidnappings and the prison break at Kuje Correctional facility against the Nigerian Army, and other security agencies, have been celebrated widely with twisted facts and information regarding the true nature of what happened by the international media, individuals and their co-travellers by hyping the ambushes, counter-attacks and repels from the Boko Haram, bandits, ISWAP and other elements to high heavens and downplayed the victories of the Nigerian Army without taking into cognizance the national security question.

Most of the gains achieved, battles repelled, men of Boko Haram/ISWAP captured or surrendered or killed were denied entries into the media space and public domain, but they rather heightened and embellished news stories of Boko Haram insurgents in a bid to give an impression of defeat and dampen the morale of our troops and the Nigerian public. This is a propaganda ploy and strategy orchestrated by the enemies of Nigeria and agent provocateurs all in a bid to drag back the hard fought war in favour of the insurgents. We are therefore calling on all well-meaning Nigerians at home and in the Diaspora to disparage and discountenance these stories.

Nevertheless, it is a common knowledge that the insurgents have been degraded, decimated and defeated. They are scattered all over the Northeast in small cells and ungoverned spaces in some forests where they launch opportunistic attacks, but the Nigerian Army troops are on their toes round the clock, making sure that these small pockets that cause myriads of challenges here and there are rounded up soonest. As a lot of military personnel recently have been deployed to these remote areas and communities with black spots to nip in the bud these pockets of ISWAP/Boko Haram trying to regroup, once and for all.

A realistic assessment of the security situation shows the insurgents are not winning the war, but have been degraded and demystified by the Nigerian Military, but are just grandstanding and using every propaganda tools and unpatriotic Nigerians including disgruntled politicians to fan the embers of divisiveness.

The recent upsurge in violence across some parts of the country has also been attributed to, and blamed on politicians according to our diligent findings and research. These are politicians whose desperation for power at whatever cost and for political gains, has seen them pitch tent with insurgents, bandits, herdsmen, kidnappers, terrorists and criminal elements from whom they expect a sustained insurrection against the Nigerian state without thought of its implications and how its impacts on the national security architecture, peace and stability.

While it is also of note, that international NGOs that have become the official mouth-pieces of terrorists and collaborators for reasons best known to them and questionable characters, activists help to promote these propaganda under the guise of exclusive news, breaking reports, tweets, or stories in social media to fan their embers and to discredit the Nigerian Army. These so-called cronies and friends of the criminal elements aid and abet them by slanting and planting stories in the public domain to favour the insurgents against our military.

At a time when people play politics with virtually everything, the military continues to make bold sacrifices to keep the nation together. Nigerians need to support our military and encourage them for having lost quiet a number of personnel at their prime, paying the ultimate price in defending the territorial integrity of the nation. It is high time we inspire our military men with our words, actions and support as they go out daily for the ultimate sacrifice of our dear nation. These spurious and orchestrated plots by enemies of the Nigerian state should be discountenanced and disregarded by well-meaning Nigerians. This is because the stories emanating from some section of the media are nothing but blatant lies and propaganda aimed at denigrating the Nigerian Army in bad light.

We urge our Military to remain focused and undeterred in their on-going military operations across the country, the onslaught against ISWAP/Boko Haram insurgents and criminal elements across the country. They should not be distracted and discouraged by the antics of these fifth columnists and evil merchants who do not mean well for our nation.

Our Military has paid the price for victory and, as such, we have a moral duty to celebrate them. They need our prayers, support and encouragement at this time of our history. They are the pride of the nation, and therefore, we should disregard all the innuendos orchestrated by unpatriotic sympathizers of the insurgents and wish to assert that no amount of propaganda, blackmail, misinformation, and fallacies against the Nigerian Army will turn the nation against its very own.

The purveyors of these stories and individuals engaged in acts capable of undermining the security architecture or re-animating a dying ISWAP/Boko Haram should be dealt with by the Federal Government henceforth. We urge the media to be vigilant and not to be hoodwinked by unscrupulous and criminal elements in the society to malign the good name and integrity of the Military and refrain from publishing any falsehood against the Nigerian Military without checking first with the authorities for fairness, objectivity and balanced reportage.