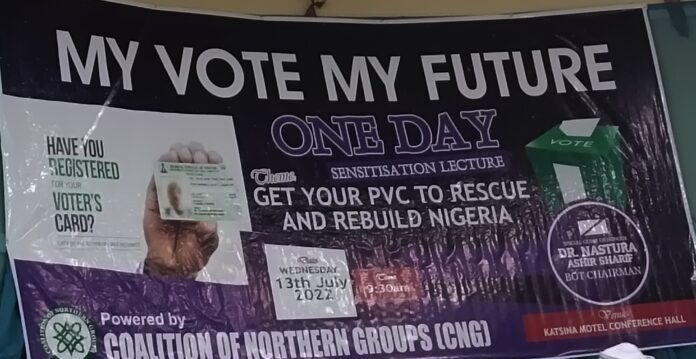 THE Coalition of Northern Groups (CNG) has charged Nigerian citizens to elect competent and capable leaders at all level in the forthcoming 2023 General Elections irrespective of their political differences in order to get things right.

This is coming as the Coalition of Northern Groups, CNG embarked on Mass Sensitization campaign across the 19 Northern States including Abuja on the importance of Permanent Voter’s Cards Registration.

Board of Trustees Chairman CNG, Dr. Nastura Ashir Sharif led the groups to Katsina State on a one-day sensitisation lecture on the need for people of the State register considering the recent report that the State is lacking behind in terms of PVR.

Speaking on a theme “Get Your PVC To Rescue And Rebuild Nigeria” the BOT kicked against vote buying and called on citizens not to indulge on such practices no matter the temptations from politicians.

Sharif however said though Nigerians especially the Northerners have lost hope in the democratic system of the country due to insecurity, economic hardship and other related challenges bedeviling the country, stating that may not be unconnected with the reason why most potential voters are reluctant to get registered.

“We are starting the Sensitisation in Katsina State because Katsina became second in PVCs registration in the last presidential election, but in this current Voter’s registration, Katsina is almost second to the last. So this lecture we are organizing will further enlighten our potential voters to register” he said.

The CNG’s Director of Political Affairs, Malam Muhammad Abdullahi Muhammad said, statistics released by the Independent National Electoral Commission (INEC) in its weekly report, the 19 Northern States including the FCT are not encouraging at all.

This in effect he explained triggered the coalition to continue to sensitise and mobilise the vast majority of potential northern Nigerians to participate in ensuring that they get registered and vote in the 2023 Elections.

He noted that the 2019 elections, Northerners especially from the Northwest region of the country gave massive votes to the ruling All Progressives Congress (APC) but wonder why the reverse is the case.