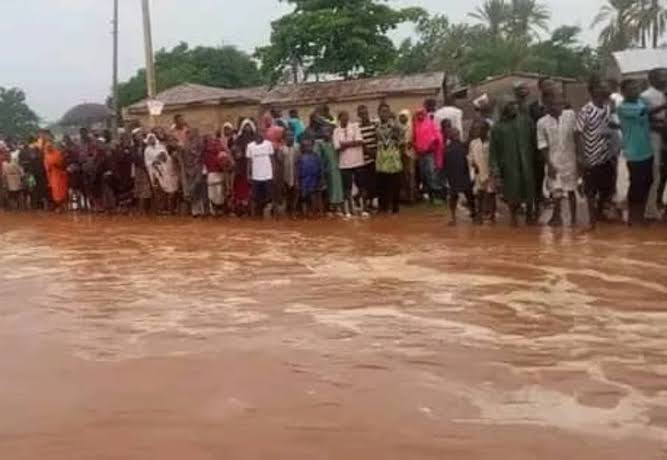 At least 100 houses were washed away by flood in 13 different communities in Darazo Local Government of Bauchi State while few number of children were declared missing.

This followed three days of heavy rainfall witnessed in the local government area that destroyed such houses, while properties worth millions of naira were affected.

Aside from washing away the houses and other structures including farmlands, the flood also rendered hundreds of people homeless forcing them to take refuge in government buildings, schools and other available spaces.

Confirming the incident over the weekend, the overseeing Director General Bauchi State Emergency Management Agency (BASEMA), Alhaji Bala Yakubu Lame explained that they have received a report that the flood affected many Households in the town, over 100 homes have been damaged or destroyed.

He however disclosed that the State Officials of the agency have since visited the town to ascertain the extent of the damages done to the communities in order to know how to immediately assist them.

The Member representing Darazo Constituency in the State House of Assembly, Kawuwa Shehu Damina in his reaction lamented that the flood destroyed properties valued at millions of Naira.

“It is a pity, when we went round the town, we saw how the flood damaged people’s food stuffs, fertilizers and many valuables while many mud houses were destroyed” Damina said

He said that the flood has affected a number of house in various communities including parts of the House of the Village Head of Darazo Palace.

Also speaking on the matter, the Chairman Darazo Local Government Council, Alh Mahmud Bello said that the heavy downpour started in the evening and if not because of the positive intervention from God, the damages will have been many, but there were no reports of deaths or injuries in all the 13 communities.

He also said that they have informed the state Government for possible assistance to the victims saying that the affected people are now living with their relatives in the town or nearby settlements that are not affected.

However, some residents of the area said that there are reports of missing people, especially children who are being searched for as of the time of this report.