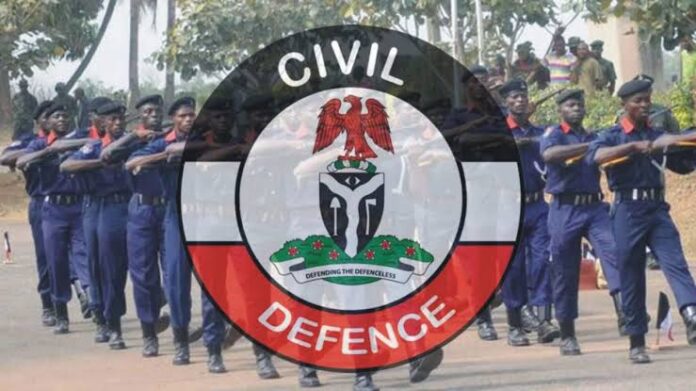 The Civil Defense Public Relations officer (PRO), Mr. Emeka Peters Okwechime who stated this at the command headquarters, Asaba said the command has made a tremendous achievement in fighting criminality in the state.

According to him, in the last six months, we have arrested over 42 suspects on various degrees of crimes committed ranging from dealing on illegal petroleum products, pipeline vandalism, crude oil theft, kidnapping, human trafficking, child molestation and fraud.”

NSCDC image maker said in May this year, about 8 suspects were prosecuted and convicted, while others are being prosecuted for fraud and theft related matters.

“In the area of human trafficking, “we have arrested 12 suspects; one of them was arrested for baby factory and would be charged to court as soon as investigations are concluded.

“The anti Vandalism squard gave a hot chase to a gang of kidnappers who disguised as transporters using a bus. They loaded the bus at Uromi junction, Agbor to Warri, but diverted into Abavo bush. Our men chased them and rescued the kidnapped victims unhurt”.

He however said that a locally made boat was intercepted with an unquantifiable amount of crude oil hidden beneath the boat saying that the suspects are being trailed.

“In the Udu area, the command bursted an illegal dump site where illegal AGOs were stored in underground tanks. We have confiscated it, and condoned off the area. Suspects are on the run”, he said.

Mr. Peters said that the command has prosecuted and convicted eight suspects while others are still in court.

On herders/farmers clash, the PRO said the Agro rangers department has brought peace, stability and sanity to some areas where herders are giving farmers tough time.