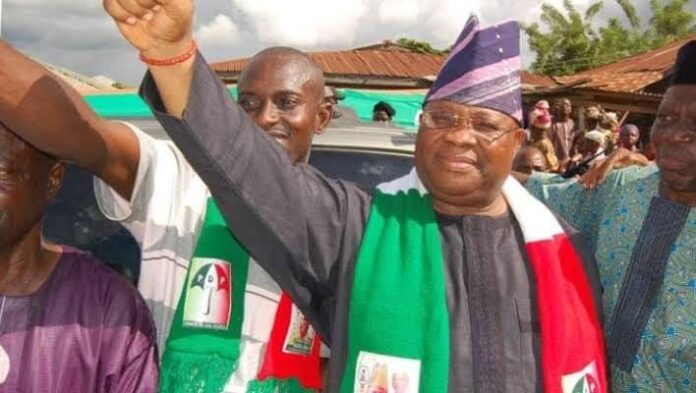 Minority Caucus of the House of Representatives has in a congratulatory message to the candidate of the PDP Ademola Adeleke on his emergence as the Osun State governor-elect, described the victory as clear indication and readiness of the party to regain lost grounds not only in the South West geo-political zone, but nationally, particularly the 2023 Presidential Election.

Minority Leader and chairman of PDP Caucus in the House, Rep Ndudi Elimelu in a statement noted that by “this victory, the recovery of the mandate that was stolen from you by the APC in 2018, now further reinforces your popularity and that of the PDP not only in Osun State, but also in the South West and the nation as a whole”

The caucus described the triumph of the PDP over the APC at Saturday’s Osun governorship election as signposts the crushing defeat that awaits the APC in the 2023 Presidential election, with the soaring popularity of its Presidential Candidate, Atiku Abubakar and his running mate Sen. Dr. Ifeanyi Okowa.

The caucus congratulated the people of Osun State for their foresight, courage, resilience and patriotism in the election and also commends the Independent National Electoral Commission (INEC) and other democratic institutions for being on the side of the people in their quest for good governance.

“With the retrieval of our mandate in Osun State, I urge you Mr. Governor-Elect to use your immense goodwill and vision to further unite the people and commence preparations for a transparent, accountable and development-oriented government that will give the people the breath of fresh air that has eluded them under the abysmal APC administration in the State for the past four years, the statement said.

The statement signed by the Minority Leader of the House Rep Ndudu Elumelu on behalf of the Caucus urged the governor-elect to tackle the task ahead of him with all sense of seriousness, carry everybody along and never underrate the confidence reposed in him by the electorate, by being responsive to their yearnings.

The caucus then prayed for continued blessings on the governor-elect, with wisdom, good health and strength to lead the people arrive at this critical time in the nation’s history.