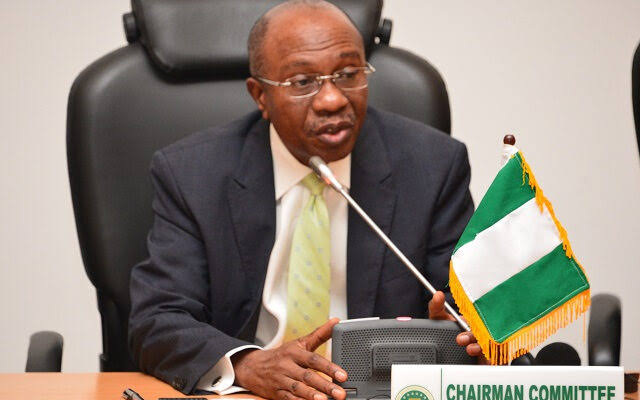 Governor of the Central Bank of Nigeria, CBN, Godwin Emefiele on Thursday commissioned a 600 million naira poultry farm project at the University of Ilorin, Kwara State.

Speaking at the commissioning ceremony the CBN governor, who was represented by Edwin Nzelu, Deputy Director and Secretary to ACGSF, Agricultural credit guarantees scheme fund, said CBN introduced various Intervention Schemes focused on creating decent job, boosting poultry production fostering innovation in the poultry sub-sector and One of such schemes is the Tertiary Institutions Poultry Revival Scheme that was conceptualized specifically for Tertiary Institutions to design and implement viable poultry projects.

“Over the years, this demand gap has driven the smuggling of unhealthy frozen chicken into the country. To close this gap, the Central Bank of Nigeria has introduced various Intervention Schemes focused on boosting poultry production, creating decent jobs, and fostering innovation in the poultry sub-sector. One of such schemes is the Tertiary Institutions Poultry Revival Scheme that was conceptualised specifically for Tertiary Institutions to design and implement viable poultry projects.

“Today we witness the commissioning of the first project to be funded and completed through the Scheme. Certainly, the laudable objectives of the Scheme including improving the revenue of tertiary institutions, employment creation and enhancing research into poultry by tertiary institutions are already being realised”

The CBN Boss, however, tasked other similar institutions across the country to follow the University of Ilorin example.

“The journey has been long and hard for us as a University. The university took a 600 million naira loan from the Central Bank of Nigeria, CBN, at a concessionary interest rate of 9% (5% for the first year) and a repayment period of 6 years, with a moratorium on the repayment of the principal for one year. Zenith Bank plc is the participating financial institution on the project.

“Accessing the loan required the University to set up a special purpose vehicle (SPV) for the project. The SPV is Unilorin Bizface synergy Limited, a limited liability company registered with the Corporate Affairs Commission.

“To guarantee the loan, the University worked out an irrevocable standing payment (ISPO) with Zenith Bank plc, ensuring Zenith Bank was paid quarterly the amount due, according to the amortization”, he said.

The project which is placed on 30 hectares started in February in the year 2022 and was commissioned on 21st July.

“On job creation, at the height of construction, the site had over 200 artisans earning their daily sustenance from it. Today the farm has 55 full time employees and has created space for students of the hosting institution to work on part time basis”, he further stated.

He dded that the University is also developing 2,000 hectares of land for Maize and Soya beans cultivation for the exclusive use of the poultry farm

The vice-chancellor however lauded the project and thanked the steering committee led by the deputy vice-chancellor, research, technology and innovation Professor Mikhail Olayinka Buhari for the efforts put in place to make the project reality and subsequent overseeing of the project.