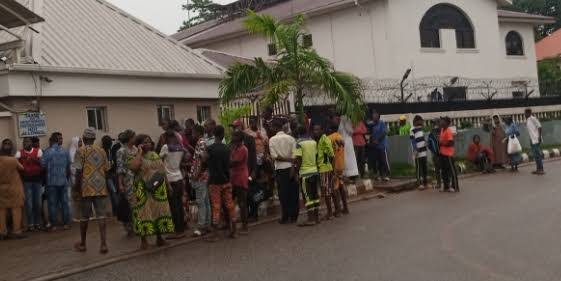 Demonstrators, on Wednesday, stormed the All Progressives Congress (APC) national secretariat to protest over the party Muslim Muslim ticket.

The protesters operating under the aegis of APC Hausa-Fulani Youth Forum who came in several buses were led by Abdullahi Bilal Mohamadu, who presented himself as the Convener of the Forum.

The protesters arrived at the venue same time the unveiling of Senator Kashim Shettima was ongoing at Musa Yar’Adua Centre.

Reading from a prepared petition addressed to the national chairman of the party, Senator Abdullahi Adamu, the protesters who displayed banners with inscriptions,” Drop Shettima and give the slot to our Christian brothers, ” A cry for justice,” said the single faith ticket was insensitive and exclusion of their Christian brothers.

“While it must be stated that there is a right to make decisions, however, such decisions must not be made to the collective detriment of the sensibilities of the people that make up the country of Nigeria, especially at a time of mutual suspicion amongst the Christians and Muslims in the northern part of the country.