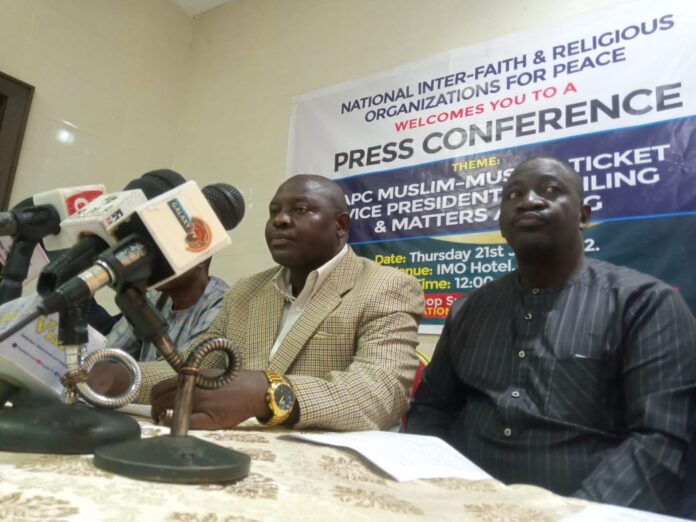 Some Christian and Muslim clerics from the north have disassociated themselves from the clergymen who attended the unveiling ceremony of the All Progressives Congress vice-presidential candidate.

The preachers, under the National Inter-Faith and Religious Organizations for Peace, said the objective was to give credibility to the party’s Muslim-Muslim ticket.

The group made this known on Friday at a press conference in Abuja.

According to a statement signed by Bishop Sunday Garuba, the clerics said it is not late for Bola Tinubu and the ruling party to do the right thing by replacing Kassim Shettima with a Christian northerner.

“We wish to state that those individuals that adorned the attire of priests and prophets at the events were procured by the APC to give the Muslim-Muslim Ticket some form of credibility, which in our opinion, was a joke taken too far. There is no way the Body of Christ in Nigeria can support such an unholy enterprise, and not when there are millions of credible Christian candidates across the country,” Bishop Garuba said.

“As a group that worked for the unity of the country for several years, we find it worrisome that the APC would act in such a manner that would disunite the country and divide the country along ethnic and religious lines.

“This is on the heels that it is on record that in the last five years of the present administration, we have been consistent in prayers and supplications for divine wisdom, protection and favour. We have also been vocal about the leadership strides of President Muhammadu Buhari in his quest to take the country to greater heights.

“The National Inter-Faith and Religious Organizations for Peace cannot be in support of a Muslim-Muslim ticket. We hold the firm conviction that such a decision would spell doom for the chances of the APC in the presidential elections. Also, the aftermath of such an insensitive decision would be mutual suspicion amongst the various faiths in the country.

“We wish to state unequivocally that as a group consisting of Christians and Muslims, we cannot afford to see President Muhammadu Buhari’s efforts jeopardized by some vested interest who are not interested in peace and tranquillity of the country.

“As a Body of Christ, we are using this medium to call on the leadership of the APC to, without delay, replace the running mate to Senator Bola Ahmed Tinubu with a Christian. No moral justification can be availed in the present circumstances and given the peculiarities of our time.

“The APC must, in good conscience, realize that the action of selecting a Muslim as a vice presidential candidate is an affront to the sensibilities of the millions of Christians in Nigeria. The argument advanced that competence should be the watchword cannot stand unless the APC wants us to believe that there are no competent Christians in this country with a high electoral value that can stand for election with Senator Bola Ahmed Tinubu”.

The group, however, expressed confidence that Tinubu will do the right thing by replacing Shettima with a Christian vice presidential candidate.

“Charity must begin at home, and as such, he must rise above religious and ethnic sentiments to do the right thing by carrying all tribes and religions along in his quest to govern the country. We cannot afford to allow this country to slide along religious lines. We must embrace and respect the religious sensitivities in the country.

“We hope this message gets to the leadership of the APC and other stakeholders to do the right thing. As a body, we shall continue to pray for wisdom for the presidential candidate of the APC now and always”.