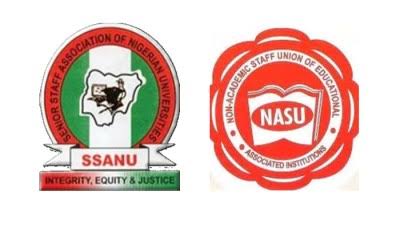 Non-Academic Staff Union of Universities (NASU) and the Senior Staff Association of Nigeria Universities (SSANU) have insisted that they will reject any salary recommendation that would cause further disparity in the University system.

This is even as the strike action embarked by the Unions entered its 117th day, with both Unions saying that out of the eight issues that led to the strike, none of them have been conclusively addressed by the Federal Government.

Addressing journalists on Friday in Abuja, general secretary of NASU, Comrade Peter Adeyemi insisted that the two unions are determined to change the status quo, saying that they remain undaunted and undeterred in the face of their salaries that have been stopped and threats issued to the Unions from various quarters

Comrade Adeyemi who spoke on behalf of both Unions said the Professor Nimi Briggs Committee which was constituted in March 2022 to renegotiate the 2009 agreement with the four University-based Unions has been biased and has betrayed the terms for which it was set up.

Nigerian Pilot reports that the Briggs Committee was given three months to conclude its negotiations with the University-based unions, which would effectively mean that its assignment ought to have ended by June 2022.

Adeyemi said NASU and SSANU held two meetings with the Briggs Committee and during both meetings, there were no deliberations on salary increment and allowances.

“While the NASU and SSANU teams had presented a Memorandum of Demands that included proposal for salary review along with appropriate salary tables, the Committee had pleaded that the two unions should take the issue of review of salaries and allowances last, because they were still interfacing with the relevant Government agencies to give them appropriate offers to counter our proposals on salary review.

“It is therefore shocking, to say the least, that while we have not even commenced discussions on salary review and other allowances, we received reports that the Committee had gone ahead to submit a report to the Federal Government recommending a ten percent (10%) increase for Non-Teaching Unions. This we find to be very unfortunate and a betrayal of confidence by the Committee. While it may be easy to dismiss this information as a mere rumour, our belief is confirmed by the fact that a report was truly submitted to the Federal Government.”

He said while it is not the desire of the Unions to prolong the strike action, they have, however, been compelled by the shabby treatment that they have received in the University system.

He said, “As at today, out of the eight issues that led to the strike, none of them have been conclusively addressed by Government. Arrears of Consequential Adjustments on Minimum Wage have only been partially paid, as in many Universities, we still have many members who have not been paid, while the Federal Universities of Agriculture have been totally left out. No Arrears of Earned Allowances has been paid. White Papers on Visitation Panels have not been released. Staff School teachers continue to languish despite a Court judgment in their favour.

“Our jobs continue to be usurped by Vice-Chancellors as job for the boys and allocated to Academic Staff. State Universities have been badly hit by poor funding, poor governance and non-payment of salaries to workers spanning into months.

“As JAC of NASU and SSANU, we are determined to change the status quo. We remain undaunted and undeterred in the face of our salaries that have been stopped and threats issued to the Unions from various quarters. We thank particularly, the Nigeria Labour Congress for its various interventions in ensuring resolution of the matter.”

The Unions urged parents and other stakeholders to continue to appeal to the Federal Government to do the needful so that they can effectively return to their offices and jobs.